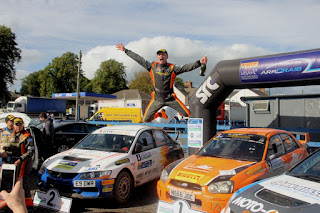 If I may, I would like to add a couple of points to my previous FB post. Without getting anyone else into trouble, the photographer who took the photo in question was accredited by the MSA and was indeed on site at the rally with the full permission of the organisers and the MoD. Given the nature of the facility, there are restrictions, but these were all complied with.

Perhaps I should also add that I consider the photographer in question to be a pal, and perhaps I should also admit that I am just as guilty as he is of instigating this story. We both thought of this as a joke, as did fellow competitors and officials and indeed the many spectators who later heard of the antics of the 'perpetrator'. As you are all too well aware such stories are the very fodder of those who follow rallying and spread like wildfire, no doubt gaining embellishment at every re-telling.

Anyway, I wrote up the story in my on-line magazine after the rally, so I'm just as guilty of spreading the story as the photographer. And for that I apologise.

We need more colourful characters like this in sport, any sport. Even people who don't know who Jock is, are up in arms at the severity of this penalty.

He is most undoubtedly a character, and the sport is all the better for it. There is no 'sponsor-speak' at the end of rallies just genuine expressions of thanks to those who put the events on and those who help. However, reporters should always be aware that there is a constant sense of mischief lurking inside that helmet, and approach him at their peril.

When the competition is underway he is as serious, competitive and indeed ruthless, as any other driver, and he has two Scottish Championship titles to prove it, but once out of the car, innocence and shyness are complete strangers to this man.

He is the 'star-jumping king' of Scottish rallying. When he wins a rally he star-jumps off the bonnet of his car to show his genuine delight - Oh b*gg*r, I shouldn't have said that, no doubt H&S will be on the case next.

I have known Jock ever since he started rallying. In fact, I daren't tell you of an incident that very day that highlighted his capacity for mischief. That will have to wait till he stops rallying as I'm not sure if retrospective punishments can be applied.

It's because of this I wonder if the members of the National Court were fully aware of the character they were dealing with earlier this week. Knowing Jock, he would be serious and contrite on the day and the 'bare' facts would be all that was considered during the process.

But one has to look further at the system. The National Court is independent of the MSA, so they cannot be entirely blamed, therefore one has to look at Motor Sport Council who are the ultimate authority in motor sporting matters in the UK. Currently the Council is comprised of 28 members representing all disciplines and the four home nations and it begs the question, were each of them fully aware of this case and the details coming up before the Court?

I have had a look down the list of names on this Council and there are a few folk on that list who could be embarrassed by their own antics in the past which I have personally witnessed on events long ago. On that basis I can't believe that they were fully aware of what was being dealt with last Tuesday and the actual circumstances on the day of the rally.

If there is a fault in the system, then it was a failing to put the matter into context. As I said, both the photographer and myself thought this just another harmless prank and so did everyone else on the day. Had this silly prank been handled rather more sensitively and privately, there would have been no public outcry. Beware the power of social media. And that's a lesson for all of us.
Posted by John Fife at 10:32