With Kris Meeke and Paul Nagle’s win and the sixth place secured by Stéphane Lefebvre/Gabin Moreau, the Citroën Total Abu Dhabi WRT enjoyed its best weekend since the start of the year. On the season’s only mixed-surface rally, the team led by Yves Matton was able to demonstrate the potential of the C3 WRC on all surfaces and prove the value of all the hard work undertaken in recent months.

Rally de España began on Friday morning, with the first leg contested predominantly on gravel. Kris Meeke quickly established himself among the leaders. After claiming a stage win on Bot (SS2), he held fifth place at the midday service despite being handicapped by running with soft tyres, which had suffered in the heat and on the tarmac sections of Terra Alta (SS3). In the afternoon, the Briton was fastest again on SS5 and moved up into third position overall, 3s behind the leader.

Following a 75-minute service, during which the Red Army’s mechanics converted the cars to their tarmac configuration, the rally continued on the wide, fast and flowing roads of Catalonia. Despite a brief shower on El Montmell (SS7), Meeke grabbed the stage win and with it, the overall lead. On the following stage, he was faster than his direct rivals to stretch his lead to over fifteen seconds.

The rest of the day saw some incredibly close times set by those at the top of the leaderboard with Kris heading back to parc ferme with a 13s lead over Sébastien Ogier and 14.5s clear of Ott Tänak.

Sunday’s third and final leg featured six stages without a service halt. Under cover of darkness, the no.7 C3 WRC driver warned his rivals of what was to come with his first stage win on L’Albiol (SS14). He also won the next two stages to complete a clean sweep on the first loop, extending his lead to 23.9s.

After claiming another two stage wins – meaning he won a total of eight out of nineteen speed tests – Meeke eased off slightly on the Power Stage. He still set second fastest time before climbing onto the roof of his C3 WRC to celebrate the win!

At the finish, Kris commented: "20 years ago I walked into this very stage to watch Colin McRae in the Subaru. I never thought then that I would be back here driving a rally car."

Yves Matton, Citroën Racing Team Principal, added: “We certainly needed a result like this to confirm the way in which we had begun to turn things around at Rallye Deutschland. This win highlights the good work that everyone has done and confirmed that the decisions that I took at the end of the spring were well-founded and warranted. Despite our constraints and the time needed to adapt to new working methods, we have shown that we were capable of reacting and that Citroën Racing remains one the leading teams in the World Rally Championship. The reliability and strength of the cars have also been excellent.”

Elfyn Evans in the DMACK Ford Fiesta rued his choice of soft compound tyres for Sunday’s final four speed tests. He was also overhauled by Ireland’s Craig Breen, who snatched fifth in the final stage despite landing from a jump with such force that it cracked his Citroen C3’s windscreen. The gap was 1.9sec!

Jari-Matti Latvala was sidelined after a heavy impact on Friday damaged the Toyota’s lubrication system while Thierry Neuville suffered misfortune on the final morning. The Belgian was forced to stop at the end of SS16 (Santa Marina) after sustaining damage to the front right of his Hyundai i20 Coupe WRC after cutting a corner. 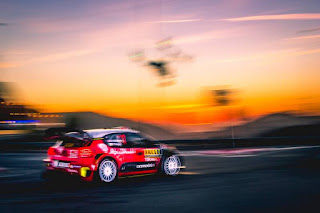