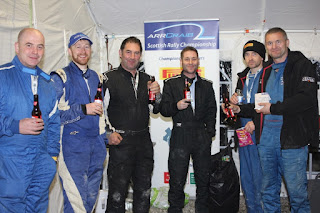 At close of play this evening, John Wink was the highest placed Scot in 4th place o the Dayinsure National although if Bruce McCombie gets his minute back he’ll be second going into the second day and the 3 final stages.

Michael noticed the wrong time right away and although he got the Marshal to change it and initial it, such is the way of major rallies that the paper trail will have to be checked first. Fingers crossed.

John Wink reckons 3rd place is within reach: “I was too cautious through the last stage tonight, I was scared of punctures. The car is better than it was so I need to attack tomorrow. Today was good practice for tomorrow,” he added.

Bruce was quite upbeat despite his wee problem: “The stages were good, a bit rough in place but they’re too tight for the Lancer. This is ideal R5 territory so I’m not surprised Tom Preston is leading. We’ve been pushing on and had a few close moments and we actually had a puncture towards the end of one of the stage but didn’t really lose any time. There’s a couple of loose bolts round the g/box, so it’s a quick spanner check and we’re good.”

Alasdair Graham is 8th but is looking for a throttle position sensor: “It broke half way through the second last stage so we did that last one with no anti-lag and no diff controller, so I don’t fancy 15 miles of stages without it tomorrow.”

Simon Hay has dropped back to 14th: “We’ve pulled the exhaust off below the manifold – it’s gassing us out! I had to turn the anti-lag off for the last two in case we did any more damage so we drove the last two tests with the hazards on.”

After a hard day learning the R2, Ally Currie is 15th: “It’s a bit different to what I’m used to and it’s taken me a while to get it set up the way I want it. On the first gravel stage it as all over the place so I softened it up for the next one. Then I had a spin and it stalled, but I caught and passed a car in the last stage. I’m happy with the set-up for tomorrow.”

Geoff Goudie was surprised to be 20th when he rolled into service tonight: “I’ve lost power to the centre diff and there’s a clatter from the rear end. I’m waiting till it falls off to ken what it is!”

In 36th place and fair enjoying himself is Max Redpath although the team is having to change a rear wheel bearing tonight and Michael Robertson is 40th after a scare in the third test when the car started to run out of fuel and he had to back off and cruise through.

Gordon Alexander broke a rear suspension arm, Ellya Gold is trying to fix his clutch tonight and David Ross had a helluva day with broken fuel pumps but all three are hoping to be fit for tomorrow.

There was no sunshine today and although it got dark and overcast, the rain held off. Goodness knows what tomorrow will bring, the wind was getting up as the Internationals headed out for the night section while the Scots headed to the SRC marquee for a beer and a pie. Athletes, each and everyone of them, eh?
Posted by John Fife at 20:58