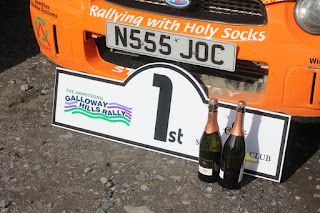 The internet, national and local news media, TV and radio have all gone crazy over this silly wee story. Even people who don't follow the sport. It's the talk of the steamie.

To date, over 89,000 people have viewed the original FB post on Wednesday (and still rising!) from America to Australia with Rally Barbados chipping in too. No doubt the powers that be will be only too well aware of the furore that has been stirred up. If they sought to 'make an example' of this incident then it has back-fired. Big time.

One further point before I hand over to a wonderfully poetic talent. If the penalty was set 'to make an example' then by implication such a harsh penalty was unjust. It makes me wonder what the 'fair' penalty would be if they didn't want to 'make an example' and simply judged the misdemeanour on its merits.

Anyway, that's for wiser counsel than mine to deliberate over, but let me try and bring this matter to a close with a smile and the hope that everyone who reads it takes it in the manner in which it was intended.

Honest, I did not write the following poem, that took a much sharper talent than mine. It arrived in the post anonymously in a hand written envelope with an identifiable post mark so I'll say no more than that. But I really would like to know for sure who wrote this. There could be a job waiting for him/her:

Here comes a salutory tale
for sporting volunteers
The National Court says stay at home -
All else will end in tears -
For if you stand from nine till five
in solitary place,
with mist and fog and wind and rain
All battering your face,
There's no reward if you should slip
from highest standard sought -
In fact a sentence punitive
will likely be your lot!

The MSA with best intent
Has marshal training praised -
And made a licence for such job
A process that is phased,
As basic marshal you can stand
in some forsaken spot,
And for no payment and no thanks
Give it your finest shot,
For with fluorescent bib,
a whistle and a flask,
You're well equipped to answer all
that spectator folk should ask!

The Calendar from the SRC
With views of bum and boob
Are not considered an offence
In fact they're on YouTube,
However, as marshal
If you show your derriere,
It's a thousand quid into the fund
I ask 'Does that seem fair?
That they should throw their weight about
decides the National Court
and soil the reputation
of National Motor sport?'

Of course, if you're a marshal,
and that's all your licence says,
You can't be censured awfully
if imperfect in your ways,
But by some curious quirk of thought
The National Court sees done,
A ban from competition
for a driver seeking fun -
It's like telling page three model
flaunting bosoms in the Sun,
That her driving licence is revoked
and her motoring days are done!

Of course, it would be petty,
to compare the FIA,
For Max Mosley was their President
and still has quite  say,
He had some private happenings
exposed by national press,
And he robustly fought his rights
With notable success,
So likewise there's a culprit in
this current crazy case -
The Sport's accredited media
who put the shot in place

So as an unpaid marshal
don't make a bum decision -
For well paid members of the Court
can hold you in derision -
Not with a 'Don't do that again'
or wee slap on the wrist,
But with the utmost power they have
and with an iron fist,
And when you're summoned to Colnbrook
on naughty step to stand,
Be ready for a six-month ban
and a fine at least a grand!

The Court Jester
Posted by John Fife at 11:52