If you believed all the TV and radio weather forecasters with their electronic maps, meteorological charts, scientific instruments, tight skirts and sharp suits then you would be sitting at home in your string vest and underpants wringing out your drookit shirt/blouse and trousers. You’d also be regretting your decision to go out and watch the Beatson’s Building Supplies backed Targa Rally and Mornish Time Trial. And there’s more, the menfolk would be anticipating an early onslaught of that most debilitating of illnesses, man-flu.

Fortunately, the doom and gloom laden prophecies did not come to pass. Of course there was a wee bit of rain, and a few passing showers, but by Mull standards the weather was glorious and definitely nowhere near as bad as we were all expecting.

For those who braved the elements, to-day’s Time Trial and yesterday’s Targa Rally provided a rather different spectacle to the one for which the glorious Isle of Mull is most famous. For those who took part in either or both, there was much sporting fun to be had. 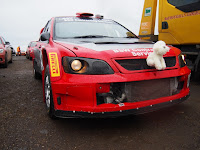 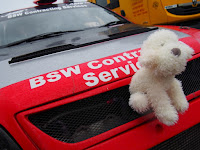 Reay MacKay scored a convincing win in to-day’s Time Trial in his Ford Focus WRC. His best run out of six was 7 seconds faster than the Subaru Impreza of Andy Davies. Brian Watson lost out on second place by 2 seconds in his Lancer (with mascot tie-wrapped to the grille) and Steven Fraser was 4th in his Lancer. In a surprising 5th place was Scott Erskine, first time behind the wheel for 5 years and 1st time out in a borrowed Fiesta R2, while Tommy Graham rounded off the top six with his Lancer after a fuel pump problem was fixed – twice!

If Erskine was top FWD car, then Eddie O’Donnell’s bright orange Escort in 7th place was top RWD machine and at the finish Mrs O’Donnell added: “It’s still for sale.”

And just to confirm my earlier provisional results for the Targa, Andy Beaumont was the winner in his Sunbeam Rapier from Garry Pearson in the Renault Clio with Craig Wallace third in his Toyota Corolla ahead of the Vauxhall Viva of David Ruddock.

Full and final results for both events on Raymond Mann’s : www.scotresults.co.uk 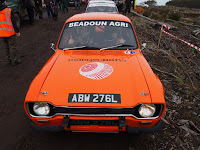 Perhaps the most encouraging aspect of the weekend is the number of competitors, volunteer officials, fans and followers who made the commitment to support this initiative created by The Guardians, Mull Car Club and the Saltire Rally Club. Both events required huge dollops of commitment, hard graft and long hours to put the show on the road and keep the spirit of motor sport alive on the island. Our grateful thanks are due to each and every one of them.

I must also make mention of the Tunnock’s Teacake eating contest, for unbeknownst to youse all out there, the winner, one Richard Crozier Esq, having scoffed 17 of the sweet wee rascals then went outside and had a fish supper with his pals. I hope none of you are staying anywhere near his digs or downwind of his drains!

Of course there were some who took the competitions seriously, but for most folk it was a chance to have a bit of fun, and that’s what they did. It’s also why we’re all in this sport in the first place.

And that includes those ‘cheeky’ boys who brought the event to a tasteful conclusion at the end of the Time Trial (see previous post).
Posted by John Fife at 22:53