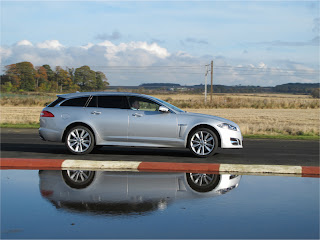 Well, there I was flicking up the steering wheel paddles out of ‘Snake’ bend and hurtling down the ‘Old Road’ which is supposed to be straight, but at those sort of speeds, there is a definite kink, although it’s flat – I was assured!

The black and white tyre barriers were a blur and the scenery was going backwards ever faster, as the braking markers grew ever larger. Apparently the top bikers at race meetings are pulling damn close to 160 down here, but I had a fridge just inches behind my head.

I was reminded of this as the first sharp right turn of the Esses burst into view over the crest and the speedo needle was getting a bit close to the 100 mph mark, when Ryan (Jaguar’s test driver) said: “Brake. Change down, down again, and aim for the yellow cone (the first apex marker) then keep it right before turning left and aiming for the next yellow cone” (the second apex marker), and then it was down two more gears into the full lock hairpin right.

Phew, that was a nice wee complex. More to the point, I forgot about the fridge. The brakes were undramatically impressive, despite the pie-fed gut being compressed by the belts, and the fridge didn’t move either. Neither did it act like a pendulum through the Esses!

And if you’re wondering where all the gears were coming from, this was the 8 speed auto in the brand new Jaguar Sportbrake with paddle shift and an ‘S’ mode - which blipped the throttle on the downchange. Magic.

Then it was up through Hannah’s chicane on to Market Straight round Pate’s right hander on to Linton Straight and into the tight, right handed Railway bend leading back up to the ‘Snake’. In other words, a very busy 1.56 miles.

What a cracking wee circuit, and just a damn shame no longer able to be used by the car racers, only motor cycle racing.

Anyway, this was where Jaguar had pitched up to impress the visiting European journalists with the performance and handing of their new Sportbrake, or estate version of the XF, if you prefer. Unusual choice perhaps, but ideal as it turned out. They had even incorporated a 55 mph ‘lane-change’ manoeuvre into the lay-out.

First impressions of the new 3 litre V6 Sportbrake is that it looks good sitting on it s 20 inch rims. Second impression is that it goes as good as it looks. And it handles. It sounds good too, even though the twin turbo, 3 litre V6 diet is strictly diesel.

As for the fridge, that was only there to prove a point. This load lugger is a still very much a performance car.
Posted by John Fife at 12:37