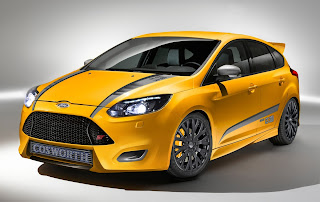 Spotted at the SEMA show in the USA was this 330 hp joint collaboration between American firm M&J with help from Ford, Cosworth LLC and Ford Racing to create a rather special Focus ST.

Ford Racing supplied the engine and suspension upgrades while Cosworth added the engine mods and the huge intercooler slung under the nose. And it was all ‘tastefully’ finished off in a paint colour called ‘Tangerine Scream’.

Although this was a one-off for the show, Ford didn’t actually deny that it could make production.

Another Ford Focus derivative will be launched in Macau ahead of the WTCC round on Sunday 18th November. Built to run as Course car for the day, by Arena, the team who runs the Aon Ford Focus race cars, the car features a Mountune’d version of the 1.6 Ford turbo and will run on Team Dynamics wheels. 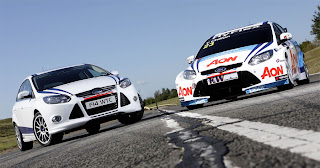 Full details of the spec will be announced at the race, but its appearance will be used to gauge whether this could become a viable road car for sale to the public.

Mike Earle, Arena Team Principal said: “Performance car enthusiasts I think are in for a huge treat with the Focus WTCC Limited Edition road car. It is a project that has more than delivered on every target we set for it when we sat down and drew up our aims for a road car based on the WTCC contender.”
Posted by John Fife at 11:56