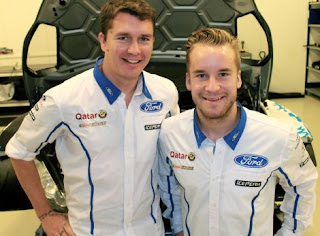 Hard on the heels of the announcement that M-Sport has secured funding for its 2013 World Rally Championship campaign from the State of Qatar comes the news that Mads Østberg and Jonas Andersson are joining the team.

The Norwegian driver scored a top-five finish on each of the 11 rounds he contested in 2012 and finished fourth overall in the drivers’ championship, just 5 points behind Jari Matti Latvala in third.

Ostberg has been nominated as Qatar M-Sport World Rally Team’s point scorers for all 13 rounds of next season’s championship.
Posted by John Fife at 15:56