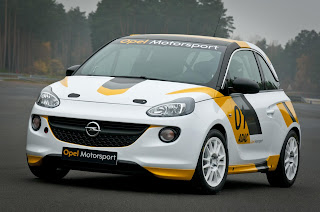 Fingers crossed, but if Opel in Germany is all set to return to the rally stage and race circuit, could Vauxhall be tempted back into the fray over here?

Details have just been announced in Germany, but at present Opel is considering only a domestic rally and race series for the new Adam small car, and certainly not thinking of a WRC or even IRC campaign, but it’s a start.

The factory has already built a 'rallye cup' version of their new Opel ADAM, which is pretty close to FIA R2 specifications. This car will be used to attract youngsters and newcomers to rallying to the national rally championship series in the ‘ADAC Junior Rallye Cup’ class for under 27 year olds, which is currently highly populated with DS3s and Fiestas. So it’s obvious where the Opel marketing boys are coming from!

Within this category, Opel is planning to run its own ‘ADAC Opel Rally Cup’ competition within the ‘ADAC Rallye Masters’ national series and are promising cash prizes for the winners.
Looking further ahead Opel is planning a “modular development programme” where talented drivers can graduate from the domestic ‘ADAC Opel Rally Cup’ to international level. In the first two stages of this progression, drivers will use the Adam, before moving up to an Opel Corsa for stages 3 and 4.

So it looks as though Opel has put some serious thought into the idea - and considerable backing. It looks the bizz though.
Posted by John Fife at 11:32