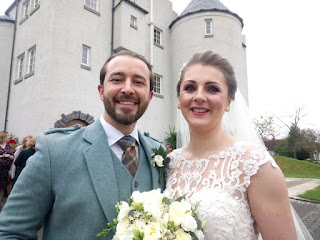 Some of you out there may recall the misadventures of a certain Baby Bunnet as mentioned periodically in the pages of the ‘Scottish Rally Championship’ newsletter and in the monthly column of a rallying newspaper called ‘Road Sport North’ a good few years back. Well, she’s all grown up now.

That might well be the reason the big chap may have appeared distracted over recent days, as he and Lady Bunnet attended her wedding on Friday. It has also been reported that Jaggy was on his best behaviour!


Family and friends from all across the nation, and even from other nations to the south and across the sea, had gathered in the Northern Lowlands of Scotland to celebrate the occasion. It was a grand day out.

After the ceremonial formality of the ‘tying of the knot’ and the 'draining of the quaich', there was feasting and dancing.

The groom spoke well, composed and mostly respectful, and so too did the Best Man, albeit a bit less respectfully and decidedly embarrassingly, while striving to be understood in his own dialect called ‘Geordie’. Apparently he comes from the quaint village of Hexham near somewhere called New Castle Up On Tyne.

A band of wandering minstrels called ‘Splendid Gentlemen’ (well worth looking up on FB) then did entertain the throng with music to fire the soul and stir the blood. The groom’s men also entertained the guests, perhaps unwittingly, with their drink infused tribal dance celebrations while belting out their favoured party anthems, most surprisingly almost in tune with the music. Subtle? Not a bit. To the uninitiated, the 'dance performances' comprised a varied selection of rhythmic finger pointing, foot stomping and backward stepping routines as the ladies looked on in wondrous disbelief, stunned into silence.

Throughout it all, the bride glowed and smiled, laughed and chatted, missing no-one. The perfect hostess, the perfect bride, and for one very fortunate (I'm biased!) young man, the perfect partner.
All too soon it was over, the music stilled, the goodbyes exchanged, the hugs got tighter and the tears did flow. As the last tail-lights disappeared over the horizon, the exhausted twosome were able to relax, finally, at the end of a most joyous, emotional and perfect day.

Cheers, Kirsty and Thomas, may you never be alone on the highway of life.
Posted by John Fife at 15:01