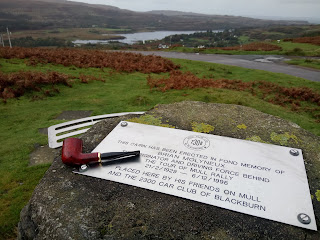 For many folk a trip to Mull would not be complete without a visit to the cairn that stands high on an exposed hillside overlooking Dervaig and out across Loch Cuan.

Erected by his family and appreciative friends, the cairn provides a lasting tribute to the man who once long ago visited this sainted land and its wild and untamed scenery on his holidays.

Funny how the mind works though. Despite the rugged vistas and tumbling waters, he was taken by another thought - these roads would be great for rallying.

And so was born the germ of an idea. He took this idea back to his friends and car club colleagues in a far off land called Englandshire where the 2300 Club was based. Far from thinking he was nuts, they all agreed to consider the prospect of running such an event in this wild and woolly foreign country to the north where the natives spoke English with an odd accent.

Fortunately, these natives, called Muileachs, saw merit in this quaint idea and far from flinging them off the island, welcomed these marauders with open arms.

The result was the first Mull Rally in 1969.

Twenty years later with the format of the rally under threat from the Motorsport Sheriffs Agency (MSA) the originator of the idea came up with another plan - closed roads!

There followed two years of patient, determined, stubborn, but always polite persuasion and perseverence and which resulted in the Act of Parliament which enabled the first special stage rally to be run over closed roads in 1990.

There was of course a whole team behind the man but it was his persistence and leadership which carried them through those difficult and often frustrating times.

His name was Brian Molyneux and his efforts are recorded on the plaque atop the cairn. Stop and have word next time you're passing, there's even a wee seat to sit and chat.

Without him there would be no reason to visit Mull at this time of year unless you were a tourist or fancied a dram of Tobermory malt.