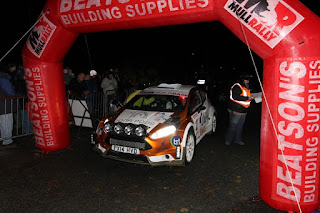 Last night, the Island of Mull again showed its malevolent side. The wet shiny tar glinted evilly in the light thrown ahead of the cars. Dark standing water lay hidden over crests and around corners like elephant traps seeking their prey of mechanical monsters. Earlier in the afternoon’s drier conditions, these same roads had merely been a challenge, now it was a matter of survival.


And the rain. Relentless, and yet every so often it would stop as if to draw breath and then just when senses had been lulled another sudden deluge would drown hopes and ambitions. What a night, what a rally. The 2019 Beatson’s Mull Rally lived up to its reputation of the ‘Best Rally in the World’ for all the wrong reasons.


Through it all, Paul MacKinnon and Paul Beaton sped and splashed their way to a convincing victory by over a minute. For a while Daniel Harper and Chris Campbell were a threatening second but that chase was put beyond doubt when the MINI lost its brakes in Ben More and had to run brakeless through Scridain to reach service and repairs. There was no way back.


Meanwhile the regal progress of the Staffa Tours Fiesta continued as if ordained to be crowned king. It was Paul’s 3rd victory on the island: “Conditions were so atrocious on that final stage, I’m just so relieved and chuffed,” said Paul, “The rally went to plan and we kept within ourselves although there was a wee bit in reserve. Daniel pushed us hard in places, but the biggest challenge was the weather. It was so changeable and conditions so unpredictable.”


And we learned something new last night. According to Harper, the last stage was “as greasy as b*ll*cks!”


In conditions more suited to ducks with hand cut webbed feet, the two wheel drive brigade were at a big disadvantage from the off. Somebody forgot to tell David Bogie and John Rowan and the Duffy brothers. Yes they were a distant 3rd and 4th but their progress was spectacular as they slipped, slithered and drifted from bend to bend.


“There was fog in that last stage too,” said David, “this is a rally that just keeps on giving, it’s relentless, absolutely relentless.”


Calum and Iain Duffy snatched 4th place from Jonathan Mounsey and Richard Wardle on the last stage: “We gave it everything we had,” said Calum, “we left it all in the stage. This rally had everything, it was mental out there.”


Mounsey was still pleased with 5th: “There’s not a scratch on the car. We went as hard as we could, but the fog spoiled the job on that last stage,” said Jonathan, “All the Notes in the world can’t help when the fog bounces the light straight back in your face, and even when you cut the spotlights, you still can’t see.”


Rounding off the top six were Eddie O’Donnell and Steven Brown with Eddie echoing the thoughts of most folk: “It’s good to see the rally back. It ran well, with no real delays and the organisation was slick. I just wanted to finish, that was my intention from the start but on the last stage, the alternator light came on!”


StephenThompson scored his best result on Mull with 7th and “loved it” with Shaun Sinclair 8th ahead of John Marshall and Craig Rutherford.


It was event sponsor Marshall who came up with one of the best descriptions: “You know when you’re watching a TV programme and somebody pours buckets of water over a windscreen and you’re sitting at home saying ‘that’s fake, it never rains like that’, well it does. It was so bad at times the wipers just made no difference whatsoever, they couldn’t clear the water!”


There was heartbreak too. First time out in his Fiesta, Gordon Morrison had worked his way up to 6th but slid off the road in Calgary. Stewart Morrison revealed the cause of his disappearance from the top ten when he explained that the two bottom links on the back axle broke which in turn caused the axle itself to snap and Ross Hunter’s valiant run which had carried the Peugeot up to 12th place was halted in Ben More with the car off the road.


And who’d have thought it, Mike Storrar finished 24th overall in the Toyota Starlet after an engine and gearbox change and some metal embroidery work to repair his back axle.


And then of course there were the Marshals, radio crews and safety personnel who stood their sodden ground as Time Cards turned to mush in their hands, and pens refused to write on wet paper. Marvellous. Each and every one of them.


Provisional Leaderboard after 17 stages (of 17):