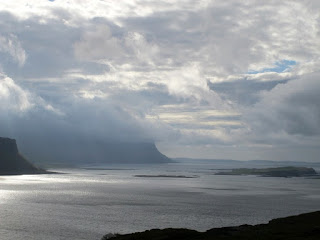 Fears are growing on the Island of Mull that when the rally arrives with its full entourage this weekend that the 300 sq mile lump of fraggle rock might sink a little lower in the water. Over this coming week, the population of 3000 islanders will more than double. Treble? Who knows?

Whatever, there isn't a bed to be had. All the B&Bs, guesthouses, hotels, self-catering, coal sheds and kennels are full to bursting. Indeed you'd be very lucky to find a floor with enough room to roll out a sleeping bag. And then there are the nutters, sorry, hardy souls who will camp out under canvas.

Many folk on and off the island are puzzled by this phenomenon. Some Muileachs take the island's attractions for granted. It's home, it's where they live, they are content. But to many thousands more right across the country this is a place of sporting pilgrimage and none more so than  this year to mark the 50th anniversary of one man's vision and achievement.

It's therefore most heartening to note that amongst the entries for this year's event there are three 'mid-life crisis' veterans taking part who contested that first ever rally way back in 1969.

Lanarkshire pairing Tony Fleming and David Fotheringham were seeded at car 67 out of 75 entries in an 1100cc Mini on that first event. They finished 21st overall. This time Tony will be at the wheel of a Peugeot 205 purchased for the exorbitant sum of £100 ten years ago and which last saw action in the Peugeot 205 Ecosse Challenge series.

However, a word to the wise, please be respectful when you approach these two stalwarts of more innocent times (Car 129). They come from an era when phones were in large red roadside boxes with just two buttons, A and B, and a satellite navigation device was what Neil Armstrong and Buzz Aldrin used on their own historic first 'out of this world' visit some 3 months earlier. And making it a family affair, Tony's younger brother Grant 'Syd the Parrot' Fleming, also a regular past Mull competitor, will also be competing with his daughter Chloe (herself a 'veteran' of 4 Mulls) on the Notes.

That's also part of the secret of Mull's attraction. Many families make a holiday of the rally spending a week or a few days on the island with partners, husbands, wives and weans all coming along for the ride.

For others it's more than just a motor sporting pilgrimage. Ted Runciman navigated for Neil Fraser way back in 1969 and they finished 28th in a pretty standard Hillman Imp with sumpguard (necessary on these rear engine machines) and spotlights. This year Ted will return, but as co-driver to his son Mark 'Speedy' Runciman in a BMW Compact.

Two months back Ted lost his partner to cancer and yet Mull was on his 'To Do' list and it remains so. In fact Ted and Speedy will use the event to raise funds for 'Maggie’s Cancer Care Centres' who were so kind and supportive to Jean in those dark days. If you see 'the boys' (Car 139) please give generously.
Posted by John Fife at 09:41