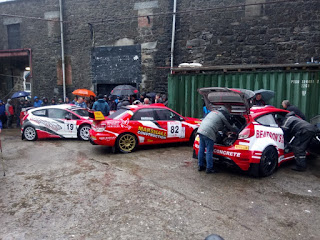 Scrutineering opened at 4pm today for 3 hours to accommodate those crews who wished to participate in tomorrow’s Shakedown, and also to get through as many cars as possible before tomorrow’s very long session ... John Cressey (36) appeared with Daniel Harper’s original rally Mini which has been fully restored and looked smart enough for a museum let alone a rally, although it was suggested that the two old relics were an ideal match ... Dave Calvert has been ‘seeded’ at number 88 in his Mk2. Why so low? That was his start number on his first Mull Rally in 1975 and he’s done every one since ... This year’s Beatson’s Mull, is not just for the oldies, Stefan Taylor (62) is doing his first Mull and just his third rally, but there’s no need to ask where he got the idea. His Dad has done it 9 times ... Speaking of Daniel Harper (4) the MINI WRC was back in pristine condition after its Wales Rally GB disappointment when it suffered driveshaft failure. Asked how he had fixed it, Daniel replied, very succinctly: “Spent a lot of money.” No need for further clarification, eh? ... Gordon ‘Montana’ Morrison (19) has only had a brief run down the road in his brand new Fiesta R5 but reckons it’s slower than his Subaru. Perhaps we’ll ask him again after the first Leg on Friday night ... Long time Vauxhall campaigner Billy Bird (16) appeared in an Escort Mk2, but underneath the Ford tinwork was his 2.2 litre Chevette engine and gearbox. Bill says, it handles a lot better than the old Chevette ... Calum Duffy has opted for a 2 litre engine in his Mk2 as opposed to a 2.5 litre job: “I thought it would be a better bet for this weather,” said Calum, “I took it for a run over ‘the lochs’ and it was all over the place,” but then he smiled, “it was still on slicks at the time! I just hope it’s still the right choice when I put the wets on.” Apparently the 2 litre lump produces around 290bhp as opposed to the 330 of the 2.5 ...  David Bogie’s Mk2 (5) was looking as smart as ever after its three corner ‘ding’ in Donegal ... I didn’t recognise Mk2 driver Fraser MacNicol (54) at first with his hat which looks more like an old sock than an item of headgear: “The engine has been completely rebuilt since it blew up on the Scottish,” said Fraser, “and I’ve fitted new springs, otherwise it’s still a forest rally car.” ... Tony Bardy (10) was looking as grim as the weather as he drove his ’01 Focus WRC into Scrutineering: “If I could get my old Nissan back I’d swap them tomorrow,” he said, “I’d sent the management system away to get repaired, again, and I was assured it had been. It was fine till I got to within 4 miles of Tobermory coming up the road and then it started acting up all over again.” ... On the other hand, Paul MacKinnon (2) was looking pretty upbeat despite a wee problem on the Cheviot with the Fiesta R5+: “A pipe came off because a silly wee clip broke. Nothing serious and otherwise perfect.” Thinking ahead to the weekend, he said: “You don’t get the chance to do events this length these days so the plan is to get round.” ... Shaun Sinclair (11) has ‘borrowed’ Freddie Lockhart’s Evo9 ... John MacCrone (1), James MacGilivray (8) and Eddie O’Donnell (14) are all running NPL prepped Mk2s with MacGilivray saying it will be the first time he’s been in a Mk2 since 2013.


If you like this wee rundown of observations, I’ve got more, but I’m fair drookit and my notebook is turning to papier mache, so that’s yer lot for now.
Posted by John Fife at 21:52