Rally - The day after

Mull woke up to a different dawn chorus this morning, the sound of silence. Apart that is from the occasional angry bark of a rescued car which had been abandoned overnight in a ditch or in the bushes as a result of the enthusiastic, over-ambitious endeavours of its owner during the previous night’s antics. You could almost tell by the staccato rapidity of the gear changes or the leisurely drone whether its driver was in a good mood, or still in bad one! 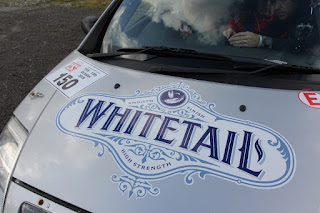 On a lighter note, first time driver on Mull, Shona Hale (car 150) was delighted she had achieved her pre-rally target to finish inside the top 100, a task made slightly easier by the fact that only 87 cars and crews finished. Driving a wee Citroen C2 bearing allegiance to her favoured tipple (or two!) and known affectionately as ‘the kettle’ due to its propensity to spit steam and boil over, the car performed faultlessly although the service crew were pressed into urgent action when she lost a mud flap! Considering this was one of the worst Mull’s on record weather-wise, Shona’s drive was quite magnificent – and she wasn’t last.

There were also a couple of unexpected visitors on the island over the weekend. One was the 84 year old Dad of rally driver and event sponsor John Marshall. Apparently his Dad has not been to many rallies as he is not really a rally fan – he is now. The other visitor was one David Richards Esq, who took quite an interest in proceedings. And yes, it was ‘that’ David Richards, the boss of Motorsport UK. Nice to know he’s still a fan and we can all remain hopeful that at long last the sport’s governors are on the side of the sport!

And now for some proper good news. James and Kerry MacGillivray are expected to be released from hospital in Paisley tomorrow having been kept in for ‘observation’. Best wishes to you both.
Posted by John Fife at 20:23