The Beatson’s Building Supplies Mornish Time Trial was big on quality although short on entries, and if you didn’t turn up that was your loss, ‘cos the 3 mile stage was judged to be perfect and the trophy table was groaning with grandiosity. I should just point out that the Tobermory whisky bottles in the photo are actually full size, so you can image the size of the cups, eh?

As things turned out, the Fastest Time of Day was set by the last car through the stage on its final run and the difference between 1st and 2nd was 0.6 of a second. That’s close.

John Rintoul and Yvonne Armour just edged out Tommy Graham and Mark Pickering for the FTD trophy. Both were in Mitsubishi Lancers, but earlier in the day, Sandy MacKenzie was giving his Opel Manta big licks and was right in the hunt till the auld yins woke up and got their eye in.

Ryan Ingram was 4th in the Honda despite breaking and replacing a bottom front suspension arm, missing out Test 3 (of 6) and then broke the one on the other side on his final run of the day. 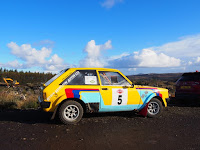 As for the weather, it was the opposite of yesterday’s heaven-sent offering with strong sunshine, blue skies and puffy white, and dry, clouds!