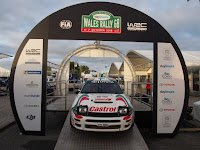 As night falls over northern Wales, darkness seeps around and over the Deeside Service Park at Dayinsure Wales Rally GB. The  lighting towers are switched on to flood the deepening gloom while  behind the multi-coloured, sponsor bedecked shutters and flaps service crews are still hard at work refettling their charges ahead of the mayhem which is about to take to the stage tomorrow evening.

The two day recce on Monday and Tuesday is over and one can only imagine the hours being spent by co-divers and team members refining Notes. Wednesday Scrutineering is also over for the day and crews will now prepare themselves for the Shakedown tomorrow morning and the Spectator Special which will get this 64th Rally of Great Britain underway late tomorrow afternoon.

Early on Monday the team reps and tyre technicians were first on the road for their own recce. Of course teams and drivers will select their own choice of tyres, but the tyre manufacturers will have input to make and will need to ensure that they have adequate stocks of the most suitable rubber for the conditions which lie ahead.

Working for Pirelli, former Scottish Rally Champion and ex-Vauxhall works driver, Andrew Wood was among those first on the road. “There were 9 cars in our convoy,” said Andrew, “and conditions in the stages had changed even between the first car and the last car. The stages are hugely different too, from long stretches of two lane ‘Motorway’ to tight, rough and technical. There’s one 20k stage where the drivers will use only two gears, the top two! Once they’re off the line it will be flat out all the way and taking HUGE cuts. With each passing car, the surface will change and so will the grip levels making tyre choice difficult. Not only that, but drivers will have to manage their tyres, when to push, and when not. Remember they are limited to the numbers of tyres they can use which only adds to the pressure to get it right.”

He also highlighted another long test which uses three different forests, each with their own stage character and also includes a stretch of tarmac.

As Ott Tanak demonstrated on the previous WRC round in Turkey, it’s not necessarily the fastest driver who will win, it’s the most intelligent. It therefore looks as though Wales will throw up a similar challenge to the world’s best drivers this weekend. Can Elfyn repeat last year’s wonderful win or will Tanak swap his helmet for his thinking cap again?
Posted by John Fife at 22:08