Rally - On a lighter note 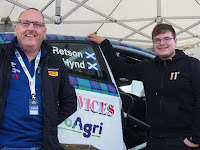 Finlay Retson and Tom Hynd were amongst the first of the far north contingent to arrive in Wales and they’ve already had a fraught time. First, Tom didn’t get his Tracker equipment when he signed on and this had to be taken to the start of the first stage on the recce for a quick install job. Then the oil light came on in the recce car and they pulled over half way through the recce. The sump had holed. That was repaired overnight in a local garage and they re-joined the recce on Tuesday – and the oil light came on, again. They looked under the car – no puddle. Tried again – engine seized. 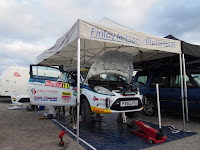 “The only fortunate thing about that, if anything could be classed as fortunate,” said Tom, “was it happened beside John Morrison and Peter Carstairs so we were able to get a lift back to Deeside with them and the car is lying abandoned somewhere in the depths of Wales.”

The recce car in question is the ex Euan Thorburn Audi A3 left hooker which Finlay has used all year but Tom still managed to blame ET: “We reckon this was all down to when Euan had it,” said Tom with a mischievous smile, “there were traces of old cracks in the sump and we reckon it just gave up the ghost, so it was nothing to do with us!”

As for Finlay, he didn’t look too fazed: “I’m just going for a finish and the experience,” he said, “we know the guys around us in our class so there will be no surprises. We’ll just have a look and see how we’re doing at the end of the first stage and take it from there.”
Posted by John Fife at 22:10