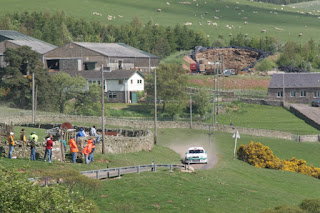 I hate to admit it, but the Emperor of Trumpland might just have a point. The phenomenon recognised as 'fake news' does appear to be spreading and having an impact on world affairs. Closer to home I can see it pervading the world of sport.

Earlier this week a local radio station in the Scottish Borders broadcast a report and published a story on their website regarding the Jim Clark Rally. The headline and first paragraph gave the distinct impression that the rally would definitely run next year. It was only later in the report that it became rather more clear that this was not quite the case as carefully explained by a spokesman for the event.

Sadly, this was yet another case of a news outlet hyping up its story with a misleading headline worded in such a way as to entice folk to read the full story which was printed on the radio station's website news pages. One of the main ideas behind this style of reporting is to get more people to 'click' on the news headline to open it up. More 'clicks' means more 'value' for current and potential advertisers, and perhaps even more 'recognition' for the originating journalist. And to hell with fairness and accuracy it would seem!

Such an introduction can be misleading at best, but malicious at worst.

For instance, this story pre-empted next month's meeting at which officials from Transport Scotland will sit down with representatives from the sport of rallying to discuss progress on the Road Closure bill which is currently being prepared for Scotland.

Imagine what these civil servants must think when they read such inaccurate reporting. It might even influence their opinions ahead of this scheduled meeting. On the other hand, maybe they are getting used to it now with all the other 'fake news' that is being bandied about purely to increase traffic to news websites and outlets.

Unfortunately, the more fake news we read, the more we will disbelieve. This could be dangerous for such 'professional' news outlets and services as it will lose them credibility, to the extent that the great British public may lose confidence in ALL news reporting. A scary thought for the world at large, eh?

At the moment the plain  and simple fact is, we don't yet know if the Bill will be passed in time (if ever!) to enable next year's Closed Road events to take place, so don't build your hopes up yet. We just have to bide our time and save the celebrations till we know for sure - and treat such 'fake news' with the scepticism and contempt that it deserves.

Anyway, if I hear anything I will try and report the facts, rather than the fancy, so keep an eye on this page if you're interested.
Posted by John Fife at 15:03