Each year some of the rally regulars pay a visit to the cairn that stands high above Dervaig overlooking the hairpins and the village. It commemorates a quiet, thoughtful, intelligent, tenacious man of vision who passed away in 1996. It was he who first thought of the idea of a rally on Mull.

Much like the man himself, the plaque is modest. The seat at the cairn is a more recent addition, allowing those who wish, to sit down, spend some time and have a chat, and this year I shared my fears.

If the ‘big’ rally doesn’t run next year then I really do fear for the future of the closed road Mull Rally as was. It’s been two years since it last ran and much has changed on the island even in that short time. Next year is also more special since it will mark the 50th anniversary of the introduction of rallying to this 300 square mile jewel of rock, water, heather and tarmac.

If the island goes rally-less for one more year it will become even harder to re-start. There are already more folk on the island unaware of its motor sporting heritage, and the disruption it brings over one long weekend in October each year. For sure, most of the local folks and local businesses want it back, but wanting and doing are two entirely different things.

That means there is a lot of pressure on a small group of people who have been tasked with ensuring that the necessary Act of Parliament is approved, passed and signed-off as soon as possible. There is a meeting scheduled for early next month where the Civil Servants tasked with finalising the bill’s wording will meet with representatives from sporting bodies, car clubs and events to appraise them of progress.

I know that some of the folk attending this meeting actually read some of the scurrilous drivel which is written on these pages so I would urge them to ask that a Statement be issued afterwards and assurance given that progress is being made. (The Scottish Association of Motor Sport Clubs would be the ideal conduit). To those of us outside the legislative process, it always seems so relaxed and long-winded, and those involved haven’t made the job easier for themselves.

They were faced with two options, modify and update the existing and original legislation or adopt the latest UK legislation. They have chosen a third option and are currently drafting a completely new Bill which incorporates all the best of the original plus the best bits form UK/Welsh, Manx and Irish legislation.

I had been led to believe that this would have been done in time for the public consultation process being commenced in early September. That process should take around 12 weeks and it hasn’t started yet. That means time is running short for the re-introduction of the Jim Clark and Mull rallies next year. I say ‘short’, not running-out or too late – yet!

We have to be patient, but because we are being well behaved and understanding the least they can do is keep us all informed of progress. It’s not ‘their’ Act, it’s ours. We ALL have a vested interest in this.

We want to create new memories not just live with memories of old, like the sight of spotlamps sweeping the dark, starlit skies like searchlights looking for bombers, red hot brake discs glowing through alloy spokes, the chatter of waste gate valves and the chirp of tyres slipping and gripping, the bellow of exhausts like mad stags on the rut and tales of hits and misses on the stages. Who can forget the sight of Duffy the Dervish rocketing down Glen Aros faster than a witch on a turbocharged broomstick, MacCrone in a Peugeot 205 that it was a WRC or MacKinnon the MacNificent, the Knight of the Corsa, Jock the Bull, Hotshot Harper or Crazy Cressey.

One of my fondest memories involves Cressey and crew. Whilst walking along Main Street in Tob in the early hours of a Sunday morning I spied this motley crew exiting the Mac and heading for the Mish. It was cold and it was raining but it was a magical night. One of the guys stopped to light his cigarette and as he swayed unsteadily on his feet, the lighter flame shot up and set fire to the skip of his baseball hat. The last I saw of him, he was heading northwards down the middle of the road. Contentedly puffing on his fag and quite oblivious to his hat ablaze. He looked like an Up Helly Aa reject. Thanks goodness it was raining.

I probably bored my silent listener with my outpouring, but he didn’t utter a word. Thanks Brian, not just for listening, but for what you did for British motorsport way back in 1969.

Oh, and if you do see wisps of vapour rising out of the glens around Dervaig or what you think are stray wisps of cloud in the heavens, that’s not a natural phenomenon, that’s pipe smoke. And something else, although he never got a knighthood, even it had been offered it just wouldn’t have been enough. Besides, Saint Brian sounds better. 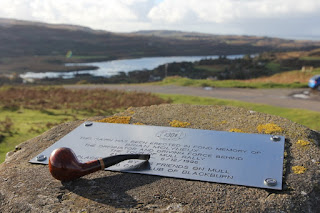