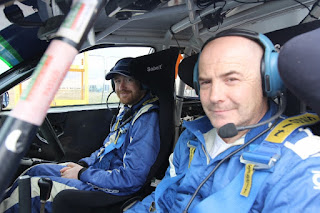 Wales – the ideal Honeymoon location. Missed out on Simon Hay and Calum Jaffray yesterday cos they were never about when I passed their camp. I kind of understand why now. Simon is actually on his honeymoon. He got married to the long suffering Hollie last Saturday in Drumtochty (the castle, not the forest) and they are both here this weekend, on honeymoon! Apparently this worked out easier than Simon thought because Hollie always wanted to visit Wales, so Simon said that sounds like a plan. It was only some time later that Hollie realised that the Dayinsure Wales Rally GB was two weeks earlier this year than last year! Naturally, our hero professed complete ignorance. However, all is not lost (before it has begun) as the pair of them are leaving the team to clear up on Sunday after the National rally finishes on Saturday night, and they fly out to Las Vegas on Sunday. Congratulations you two and best wishes from all in Scottish rallying.
Posted by John Fife at 12:24