Rally - Aquaplaning on the Ranges 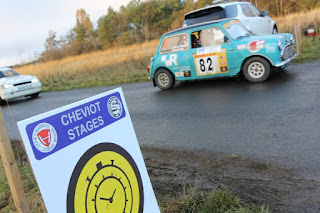 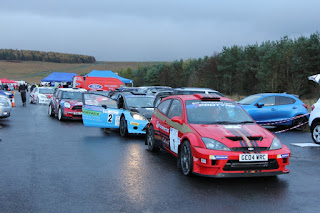 Anyone who claims not to have slid, slithered or spun at Otterburn today is telling fibs. If not fibs, then big fat porkies. The range roads were in a particularly vindictive mood for the Ford Parts Cheviot Stages Rally. It was dry, then it rained, then it was dry, then it snowed, then it sort of dried a bit, before another rain shower followed by glorious sunshine. And it still wasn’t finished, when the sun dropped below the horizon it started to freeze – welcome to Northumberland, eh?

Survival was the name of the game, speed was secondary. Even the winners, Peter Taylor and Phil Clarke had a lucky escape. Two corners after the start of Stage 10, the Fiesta crested a brow as the sun was setting: “I was going too fast,” admitted Peter, “and I just caught the sun in my eyes and the tail stepped out. We were sideways for 40 yards or more, another 10 degrees of steering lock and I might have got away with it.” As events turned out, he didn’t quite, and smacked the co-driver’s door against a traffic sign – a 30 limit sign!

In second place, and showing some signs of emotion, were Jason Pritchard and Andrew Roughead in the Ford Focus. When Daniel Harper spun off and out of the fray in the MINI, all they had to do was finish to clinch the 2018 British Tarmac Championship title. And the emotion? That was down to a family memory: “My Dad finished 2nd in the Championship to John Price 30 years ago,” said Jason, “he always seemed to be the bridesmaid, so it’s nice to have the Pritchard name on the trophy at last!”

Gordon Morrison and Calum MacPherson scored an excellent third place in the Subaru, but they were fortunate too: “We hit water on a corner in SS4 and spun off,” said Gordon, adding, “we actually cleared a ditch and landed in a field. How we got back on I don’t know!”

Stephen Simpson finished 4th ahead of a serious scrap between long time friends and rivals, David Hardie and Mark McCulloch. Mark led after the morning stages but David got back in front over the afternoon run, the pair separated by just 13 seconds.

Paul MacKinnon was 7th after breaking a driveshaft and snapping a steering link in the Fiesta while the ‘star of the rally’ was 8th. Barry Lindsay in the 1600 class winning Peugeot was scintillating to watch in the wet and treacherous conditions. He even set a 3rd fastest time on the second run over the Riverside road. There was another ‘star driver’ too. Rounding off the top ten behind 9th placed Lee Hastings was Keith Robathan in his taxi. The BMW looked like a refugee from the sales rep’s car park but it did the business.

Top seed Damien Cole was one among many who took an uncharacteristic trip into the scenery, the Focus finding a particularly boggy field in the 6th test in which to come to rest. Michael Glendinning was also choosey about where he parked the Subaru: “I came over a crest to find cars off all over the place,” he recalled, “so I just had to go for the biggest gap I could find. The sumpguard grounded and launched us over a ditch.”

At least he could laugh, there were quite a few sore and sorry looking cars by the finish.