Some of the world's top motor sports press were in attendance as were representatives from what are claimed to be Scotland's two top daily newspapers, so the questions were - interesting. So if the boys do well on this weekend's first rally outing with the new car, then maybe it will put Scottish rallying back on the international map. Robert might not be Scottish, but at least he's a Celt!

Mind you, the cynic in me wonders if they turned up just for the Tunnocks goodie bag (always one of the best in the business) so we'll await tomorrow's headlines with interest.

It was quite a family occasion with both Robert's and Stuart's parents in attendance at the photocall, plus the man himself, Le Patron as the French would say, Scotland's answer to Enzo Ferrari - in biscuits that is, as opposed to exoticars, if you see what I mean. 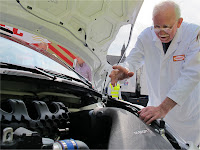 Typical of Boyd Tunnock, he got himself into the R5 with Robert showing him the controls, then he was under the bonnet looking at the 1.6 turbo and all the gubbins. It's all so different from Boyd's days rallying MGAs and Ford Zephyrs in the 1950s. Thankfully he stuck to the family business rather than becoming a professional rally driver. That would have been a very sad loss to the nation's palate, and now through rallying, Robert and Stuart will carry the message to the Europeans.

After a shakedown at Goodwood two weekends ago, the team are in action in Finland over the weekend of 1st to 3rd August with 'qualifying' for the Neste Oil Rally Finland on Wednesday 31st July, but ahead of that they have a wee test planned in Estonia, and in fact set off tomorrow for foreign parts.
Posted by John Fife at 15:55