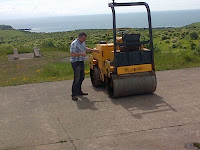 On the basis that you should always see and test-drive prospective vehicle purchases before you part with coin, ‘Lucky’ Sturrock was spotted at the weekend doing the Notes for the forthcoming ‘usedcarparts’ Solway Coast Rally in his latest conspicuously yellow, open-topped two wheeled velocipede.

Designed to go as fast backwards as furrit, and powered by a diesel engine which generates so much power and torque that it requires water-cooled wheels, Lucky was spotted practicing burn-outs at stage starts, stage finishes and everything in between including the yumps. Apparently he confidently reassured disinterested bystanders that it wasn’t actually wheel-smoking or steaming burn-outs, but could offer no plausible reason as to the source of the blue haze.

It certainly couldn’t have been the exhaust as the vehicle comes with a Euro-6 DPF, however Lucky was in fact known to have had coco-pops and raspberry jam for breakfast the previous day and beans and custard for lunch, with a curry the night before. The MoD declared Bill’s *rs* a danger area, and subsequently 'pit oot the rid flags'.

However, it was noticed that he was testing the latest Michellikook hardest compound tyres during his Note generating trips over the Kirkcudbright ranges.

As for his emergency braking practice, you should see the big black lines that he laid down. Smokin!
Posted by John Fife at 21:15