Rally - F1 in the Forest 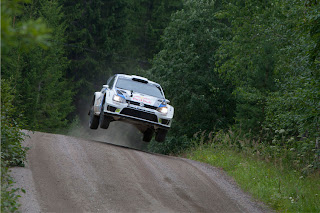 Ten years ago (2003) Markko Märtin set the world record of 57 metres for the longest jump in the history of the WRC on the “Ouninpohja” special stage on Rally Finland. 57 metres without a wheel touching the ground, 57 metres without the driver having any influence on the car. Only those who can combine absolute control over their car with hitting the crest at exactly the right angle will emerge successful. Any mistake is punished immediately and severely.

This rally demands not just high speed and precision, but toughness and durability from engines, drivetrains and suspensions, so I found what Dr. Donatus Wichelhaus, Head of Engine Development for Volkswagen WRC, had to say on the matter very interesting. To you and me, a rev-limiter is a re-limiter, but to him, it is rather more complicated.

"The FIA World Rally Championship (WRC) regulations stipulate that the 1.6-litre turbo engines must not exceed an engine speed of 8,500 rpm. This is a key factor, particularly at the Rally Finland. Only those who are able to get as close to this limit without exceeding it on the long full-throttle sections are able to get the most out of the engine. This is because the engine’s injection must be electronically deactivated if the limit is exceeded."

"The Volkswagen engineers prepared for this by modifying the engine management system and running tests prior to the rally. The most crucial aspect of the event happens when the World Rally Cars’ wheels leave the road during the countless jumps. The lack of resistance causes the engine speed to exceed the magic value and the injection is switched off. However, the engine has to be back to the desired speed before it lands, in order to avoid losing drive and, consequently, time."

How that is achieved is just one of the dark arts of rallying, but there's rather more to it than a simple rev-limiter! Get it wrong, and the engine makes just one more note - a violent bang.

Rally Finland takes place this weekend. It's just a pity that it will be overhadowed (in Scotland at least!) by the Speyside Stages at Elgin on Saturday!
Posted by John Fife at 22:02