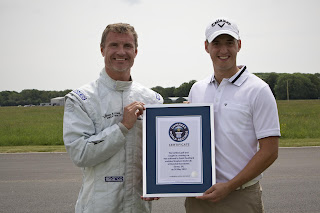 The Guinness Book of Records now has a new entry for the ‘farthest golf shot caught in a moving car’ following an interestingly pointless escapade carried out by David Coulthard, Jake Shepherd and Mercedes-Benz.

The statistics of the event are really quite staggering. Jake drove the ball off the tee at 178 mph while David was driving a 571 hp SLS AMG Roadster at 120 mph – and caught the ball in the moving car some 275 yards away from the tee! 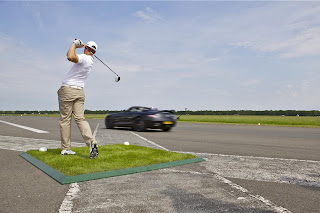 Fortunately, the event was captured on film and shows the exact moment when David caught the mid-flight golf ball between the seats of the car.

Afterwards, David said: “The only way to track the ball was to keep your eyes on it all the time: it’s a real adrenaline rush but it’s not the most comfortable thing to do because for a moment, you’re not watching the road!”

“I was as happy as I’ve ever been winning a Grand Prix because I was so surprised quite frankly that it went in, and went in so solidly,” he added.

The film is worth a wee look:  www.youtube.com/mercedesbenzuk
Posted by John Fife at 17:00