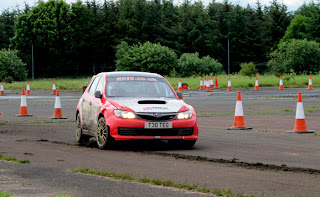 Michael Glendinning leads the Turnbull Trophy Rally after 2 of the day’s 8 stages at Albemarle just over the Border near Hexham. Although this is a round of the Scottish Tarmack Rally Championship very few of the regulars have made the trip south, that means stacks of points for those who made the effort!
It’s five years since rally cars last used this MOD facility and the surfaces are generally in good nick. It was wet and slippery for the first run, but the second test was miuch drier and folk were reaching for slicks.

Taylor in the FWD Cliuo took 3 secs out of Glendinning in the second stage, so the fight is on. Ross Fernie is top Scot in third place overall, and Jim Sharp isn’t.  Jim cowped his Impreza on the Galloway Hills last year and this is the car’s first run out since then.

“The tyres went off on the second test,” explained Jim, “they were well con-ted! One went convex like a motor cycle tyre and the other collapsed to a concave shape. They were old tyres anyway, I was just using them up.” Mind you, he was lucky, the wire braiding was showing through the motor cycle tyre shaped wheel and it wouldn’t have last another lap.

Late entry Colin Gemmell is lying fifth, but 5 seconds cover the 4th to 7th places at the moment.

Stuart Walker has had an ‘off’ and appeared at the stage finish with half an acre of grass stuffed into the Lancer’s grille and Matthew Kesson is already on his way home. The Nova broke its diff.

And snapping at their heels in 11th place is Barry Lindsay in the Peugeot 106.