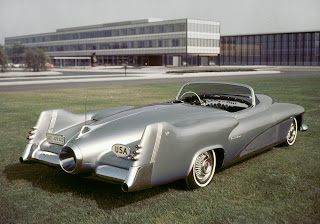 To celebrate its GM Design studio’s 85th birthday this month, GM has released some images from its archives. And what a stunning series of images and cars they reveal. These must surely rank amongst the most desirable of cars of all times – for all the wrong reasons! 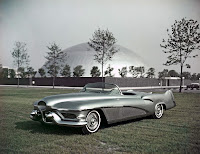 Perhaps the most striking was the 1951 LeSabre concept which apparently was inspired by the F-86 Sabre jet. It featured a one-touch top that closed automatically at a drop of rain, heated power seats, illuminated knobs and switches, a power antenna, and the world’s first wrap-around windshield. Outrageous, and beautifully ugly.

Apart from size, the other aspect that marked out American cars from the fifties was fins. Inspired by the World War II-era twin-fuselage fighter, the Lockheed P-38, the tailfins set off a decade-long styling trend. Design chief Harley Earl had taken his designers to see the P-38 Lockheed Lightning at an Air Force base outside Detroit. As a result, Cadillac’s chief designer William Mitchell came up with the tailfins on the 1948 Cadillac..

In 1949, GM Styling introduced the first hardtops on Buick, Cadillac and Oldsmobile models which eliminated the B-pillar roof supports and led to the Chevrolet Corvette and the Cadillac Eldorado – eventual classics of American car design. 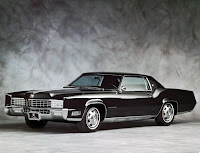 When Harley Earl retired, William Mitchell became head of design and amongst his favoured sayings was: “Trousers don’t look any damn good without a crease in them; you’ve got to have an edge to accentuate form.”

No surprise then when the first Corvette Stingrays were revealed then, eh? Mitchell had purchased a retired, racing chassis from the corporation, which had ended its participation in motorsport and retrofitted it with a body he called the ‘Stingray’. The resultant race car inspired the design of the 1963 Corvette Stingray. His experimental Corvettes, the Mako Shark in 1963 and the Manta Ray in 1969 continued his passion for sharp lines.

Sadly those days of ostentatious excess are long gone, but it may be surprising to know that today GM employs 1,900 men and women in its 10 global design centres across the world.

Computers, CAD, fuel efficiency and Health & Safety have a lot to answer for.

P.S. Now we know where Simon Cowell got his dress sense inspiration, check out the trouser creases!
Posted by John Fife at 16:38