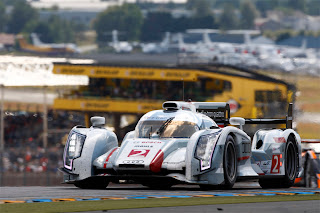 I thought our boys ‘done good’ at Le Mans over the weekend. Allan McNish was on the podium after finishing in the second placed Audi R18 e-tron quattro while Peter Dumbreck and Ryan Dalziel were in sixth and seventh places, but Marino Franchitti didn’t get a lot of laps in when the Nissan Deltawing was elbowed off the track and into the barrier – but not when Marino was driving!

Allan McNish had his problems too. He was in the hunt for first place until he tripped up over a slower car: After the race Allan said: "I’m devastated. I’m sorry for our team - Dindo, Tom, the engineers and the mechanics. They did a perfect job throughout the race. Despite a few problems we were in contention for victory up to my accident. I caught a slower GT vehicle in the Porsche corners and expected the driver to stay on the right-hand side. But he didn’t. I haven’t got a clue why. I spun and crashed into the guard rail with the right front. That damaged the front bodywork and the suspension - the necessary repair cost us two laps. That was a very, very big disappointment."

Peter Dumbreck was part of the JRM team which finished sixth overall in the Honda HPD ARX 03a, while Ryan Dalziel in the American Starworks team Honda HPD ARX 03b was seventh overall.
Posted by John Fife at 10:02