No wonder folk go abroad on holiday. It’s not just hotel accommodation prices and fuel costs that drive folk abroad, the price of catering is extortionate compared to the cost of the food itself.

White attending the Hillhead show in Derbyshire earlier this week I purchased a sausage roll, and nearly choked on the price. The mobile caterer charged me £2.95 for a single sausage roll. Crikey, I can get four for £2.30 in Greggs! 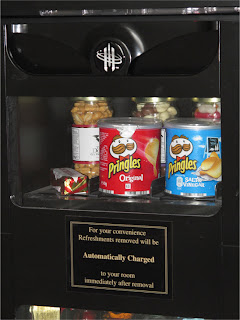 On the way home, I stopped at Tebay on the M6 where a small pork pie was £1.65 and a medium cup of Americano (that’s just plain ordinary coffee with a fancy name) was £2.69.

That wasn’t the worst example of overcharging though. Last weekend I looked (just looked mind you) in the mini-bar while staying at the Dunkeld Hydro Hotel.

As you’d expect the drinks prices were awfy dear with miniatures charged at £7.50 while a bottle of beer was a fiver.

But even more criminal was the price of one of life’s little staples, a Tunnock’s Caramel Wafer. The price list said I would be charged TWO pounds for ONE woofer! I can get 8 in Tesco for £1.49.

And for a small tub of Pringles the price was a ‘mere’ three quid while they wanted five quid for a jar of jelly beans.

No wonder the Scots get a bad reputation where money is concerned. It’s not that we don’t want to part with our cash – it’s just that we can’t afford the prices, even here at home.

On telly last night there was an advert for a week’s holiday in Turkey. The cost? 62 quid.

So for the ‘Hydro’ price of 8 Tunnock’s Caramel Wafers, 4 tubs of Pringles and two bottles of wine (at £12 each) I could have a week in Turkey. Where’s my Passport?
Posted by John Fife at 16:37