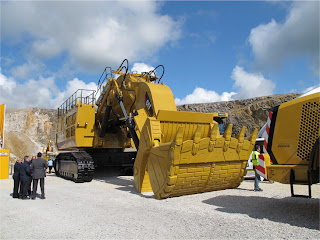 A few folk have challenged me over the past couple of days wondering why on earth a so-called ‘motoring journalist’ was at the Hillhead show which specialises in construction, mining and quarrying equipment. Thankfully, to some commissioning editors, anything with wheels and an engine must have something to do with motoring, and I use the word ‘thankfully’ deliberately – it keeps me in work.

Then again, to some extent, they are right, and I defy anyone with an interest in cars not to have some respect at least for vans, lorries and earthmovers. So when it comes to heavy plant it can still exert a powerful fascination. At the Hillhead show there were quite a few grown men and plenty of elderly men who were touring the stands and filling their carrier bags with brochures and pamphlets – just like kids at a motor show.

The star of this year’s show was the Cat 6030. Yes, it has wheels (albeit inside the tracks) and it has a large engine (well, two actually), so it qualifies as a ‘motoring’ story, but the sheer size of the thing will undoubtedly appeal to the small boy in all of us.

The Cat 6030 hydraulic excavator towered over everything else, like a Transformer in a box of Lego. Designed primarily for opencast mining duties this machine is the height of a three storey house, with the driver having to climb two flights of stairs to reach his office.

At around £4.5m each, the 6030 is not for the faint-hearted, but the Tower Colliery in Wales has ordered four. The first of the four 6030’s has already been built up on the South Wales site and this show machine will be dismantled and transported to South Wales after the show. Apparently, it was delivered to Hillhead in component form on 17 artics and lowloaders and built up on site.

But here’s a thought. At a million quid for a Bugatti Veyron or even just 200 grand for McLaren MP4-12C, this machine has to be a snip at £4.5m. For a start it weighs 287 tonnes, that makes it sound positively cheap compared to these exotic automotive midgets!
Posted by John Fife at 16:48