Road - Not so Brute Ute 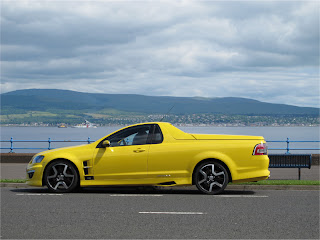 Last week, Chevrolet was in town, this week it was Vauxhall, and like its American cousin, the Vauxhallers had brought along something interesting in addition to the usual mix of Corsas, Astras, Insignias, Ampera and a Combo van. They also brought along a Vauxhall Maloo, 6.2 litres of tasteful Australian excess wrapped up in a subdued, nondescript, riot of canary yellow.

Next to an Indian tiger this is about as feral as a Scottish wildcat. It looks the part. It’s got the claws, the fangs and the attitude, but it really is just a big pussy cat. The clutch is light, so is the steering, and the gearshift lets you know the cogs are big, but easy to move around the 6 speed ‘box. It’s also got four pipes sticking out the back, but it’s quiet, too quiet. It doesn’t quake, scream or bellow, it just waffles along like a big Labrador with its tongue lolling out. 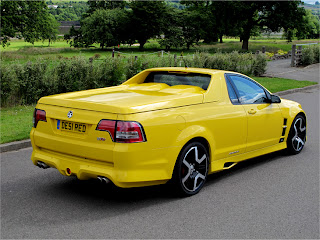 Out on the A8 heading towards Greenock, a set of blue lights on the verge attracted interest. Up a gear and slow down. The cops had stopped a youngster in a GTI, poor sod. Attracted either by the approaching yellow glow or subdued beat of a throttled back V8, they looked up as I cruised by. With a look of dismay, tinged with missed opportunity they eyed the approaching ticket magnet. All they had managed to nab was a young bloke in a hot hatch, not a truly tasty target in a bright yellow, decibel vomiting earthquake.

And yet it would be unwise to relax thinking this Aussie charmer is just 8 cylinders and girders. Once out of sight (and earshot) of the cops, drop two gears, sink the bootie, and the world is sent backwards like the Tardis flightdeck. That’s down to 425 bhp and 550 Nm of torque. Sadly, the pulsation of speed is not matched by the explosion of sound.Yes, there is a nice wuffle, but it wouldn't waken a nun. 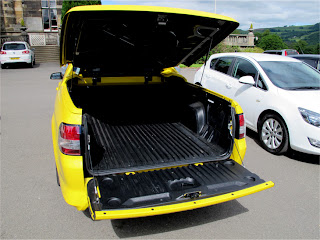 It may have a 4.9 second 0 to 60 time and a top speed (limited) of 155 mph, but it’s just so damned civilised. It even rides well. In fact, on its 20 inch rims it rides a heckuva lot better than some sporting saloons with rarely a shimmy or a shake over uneven surfaces. In fact, not at all like any other pickup.

And here’s the thing, if it had more noise, no one would drive it quick, no one would need to, so licences would be safe. A proper V8 soundtrack would be better than speed limits and speed cops to control excess.

This thing is stupid, pointless and has a terrible thirst. It even had a ‘launch control’ button, in a pickup! So why the hell do I want one?
Posted by John Fife at 16:50