Road - Silence of the Vans 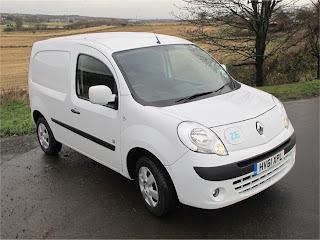 Well, there I was, averaging 3.67 mpkWh. And no, I wasn’t boiling a kettle. I was driving a van, an electric van. Renault had brought a couple of Kangoo ZE all-electric vans up north for the Scottish motoring writers to try out, and it was quite eerie.

The vans had just arrived in the UK and this was our first chance to drive them. There is no external difference apart from the ‘fuel flap’ on the nose and there is little to give the game away inside, until you turn the key – and nothing happens!
Well, a green ‘Go’ light does appear on the dash and this informs the driver that the system is primed and raring to go. Select ‘D’ on the automatic style stick-shift, a gentle prod on the accelerator and suddenly movement is underway – silently. 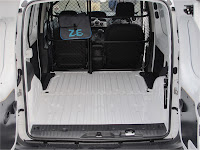 In fact the whole experience is just like driving an ordinary vehicle although the braking takes a bit of getting used to. It doesn’t do freewheeling. When you lift your foot off the accelerator, the vehicle immediately starts to slow down. It’s quite disconcerting at first because although you haven’t touched the brakes, there is a bit of serious deceleration underway. Once you get used to it, and learn to anticipate it, there is little need to use the brakes except when some silly burd with one hand on the wheel, the other clamping her phone to her head decides to turn right across your bows, while indicating left. I was very nearly the first British journalist to crash an electric Kangoo.
Renault have also addressed the price issue which has plagued the adoption of electric vehicles. The base model van is 17 grand (excl VAT) plus a monthly subscription for the battery pack starting from 60 quid a month. Thereafter a full charge is expected to cost around £2.50 and the van should be good for a range of 105 miles - unless you’re playing silly beggars at the traffic lights because of the instant torque!
Yes, it will spin its wheels, but it wisnae me, it was another journalist!
The battery pack sits under the rear floor so the van part of the vehicle still has the same volume and payload of a diesel or petrol version, so there is no compromise there. It won’t suit everyone, but at this sort of price, it could appeal to those delivery drivers in congested town and city centres who don’t move far from base.
Posted by John Fife at 21:14