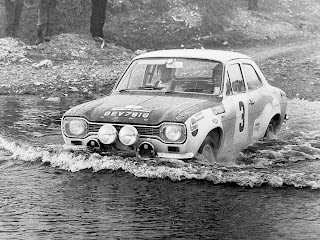 As part of their ongoing 100th anniversary celebrations, Ford of Britain issued this photograph this week. The only reason for publishing it, is cos I like it, and it reminds me of real rallies before pace notes, repeated loops, central servicing, healthy diets  and 'elf'n'safety'.

The photo was taken on the 1969 San Remo Rally when Roger Clark and Jim Porter finished tenth behind the three winning Lancia Fulvias of Harry Källström, Rauno Aaltonen (with Henry Liddon) and Sergio Barbasio and there were a couple of Porsche 911s in there too.

On another very obscure point. There were seven Fords in the top seven places on the 1969 Fram Welsh Rally that year. Ove Anderson won outright in an Escort TC, with Chris Sclater second in a Cortina TC, but the crucial difference here was that the new Escort was 136 kgs lighter than the Cortina. A new rally star was born.

The Twin Cam Escort had been introduced the year before with Ove Andersson and John Davenport taking it to third on the ’68 San Remo and who then finished second behind Clark and Porter on the Tulip Rally, with Clark and Porter winning again on that year’s Acropolis. A far cry from this weekend’s Wales Rally GB forest autotest, eh?
Posted by John Fife at 17:34