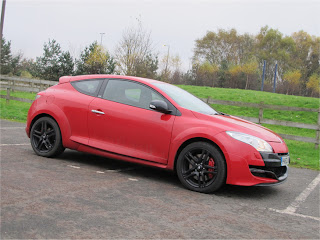 Unfortunately the French word for ‘sizzle’ is 'crepiter'. I say unfortunately, because I wanted to use the French word to describe last week’s press appraisal car, the Renaultsport Megane 250 RS which was very reluctantly handed back when the Renault man called to collect it. It may be just my warped sense of humour, but the French word for sizzle is a bit too close to some earthy English lavatorial expressions to do the 250 RS justice!
But then again, maybe it’s a good thing it’s gone, cos I still have my licence. The turbocharged, 2 litre, four cylinder engine is deceptively quick. Sitting cruising at what feels a like a relaxed and comfy 70 mph turns out to be 90! It’s the same when squirting along the back roads, the bends come up a bit more eagerly than anticipated.
Thank goodness for the Brembos and the big discs all round. In fact Renault claim the biggest front discs (340 mm) of any comparative hot hatch. So maybe they had a hunch that this 250 bhp sizzler would catch out the dozy driver. Having said that, the suspension and chassis are good for it.
What does catch out the unwary is the fact that the power is not delivered in frenetic lumps like highly tuned, high revving, high performance non-turbo cars. Neither does it have any noticeable turbo lag, as the turbo pumps in the oomph almost imperceptibly but increasingly strongly all the way up to 5500 rpm when it maxes out at 340 Nm of torque. The engine will keep on revving to 6700 rpm, but there’s no point. Keep it on boost, and it pulls like George Clooney at a granny night.
Neither does it scratch and scrabble for grip with a mechanical LSD keeping the front end under control - most of the time.
24 grand sounds a lot of money, but then again, there’s more fizz in champagne than a bottle of Beaujolais.
Full Road test at: http://www.jaggybunnet.co.uk/Year2011/RCarsPage36.html