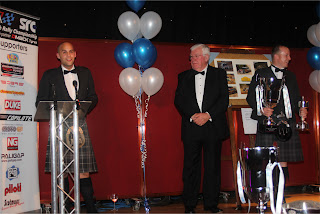 Scottish rallying accorded its newest British Champions a standing ovation last night in Glasgow. At the Scottish Rally Championship awards, a packed house of 450 end of season revellers rose to their feet as one when David Bogie and Kevin Rae were greeted as only the second Scots to win three consecutive national titles since the late Drew Gallacher (in 1978, '79, and '80) and the first Scots to win the British title since Alister McRae last won it 16 years ago.

It was a cracking night and worthy of true champions with Andrew Cowan presenting the awards. Just the week before David and Kevin had been hailed British Champions at the Dulux British Championship awards night in Englandshire, but a Scottish homecoming and celebration is always extra special.

And here's a nice wee story about a nice young man. David was out driving his truck the other day and stopped outside a butcher's shop in Carlisle to buy a pie for his lunch. He joined the queue and waited his turn till he got to the counter and asked for a steak pie to take out.

The butcher looked at him: "You're David Bogie, aren't you, the new British Rally Champion?"

The butcher replied: "Me and my mates have been following you all year, well done, you deserve it," - and wouldn't take any money for the pie!

When David got back out to the truck, he phoned Kevin to tell him that fame does have some rewards. Quick as a flash, Kevin said: "Quick, get round to Currys and Comet and see if they'll give a you a free plasma TV."
Posted by John Fife at 12:48