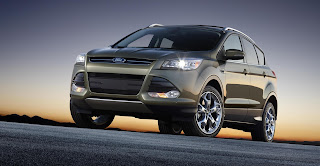 The Los Angeles Motor Show opens to the public tomorrow and whilst it is of little direct interest to us over here, that fact that more and more manufacturers are designing and producing ‘global’ cars means that any new products which are shown over there might well appear over here.

For instance, Ford will debut its new Ford Escape at the show, otherwise known as the Ford Kuga in Europe. Obviously the marketing types have been at the blurb already because this four wheel drive SUV is being touted as a ‘Smarter Utility Vehicle’ because it will have more electronics inside it than R2D2.


For instance, it’s got a ‘hands-free’ powered tailgate. This is not radically new as powered tailgates have been around for a while now, but Ford have taken the idea a step further, a sensible step further that is.
Imagine approaching the car with your hands full of shopping and your ‘blipper-key’ is still in your pocket. Well, because of the proximity sensor, the car knows the key is approaching but if hands are full, the ground is wet and it’s still raining, what do you do? Apparently, if you wave or kick your foot under the tailgate it will open automatically. Now that’s progress.
Ford is also promising a few more ‘driver aids’ with ‘automatic hands-free parallel parking’ (which really works), voice activated controls for some of the interior gadgets, automatic ‘blind-spot’ warnings and an automatic over-ride system which will apply the brakes in an emergency or if it thinks the driver is tackling a corner too enthusiastically. Naturally there will be a switch to over-ride this electronic witchcraft!
European customers will get their first sight of the new car at the Geneva Motor Show next March, but for now, here’s a couple of pics.
Posted by John Fife at 11:11