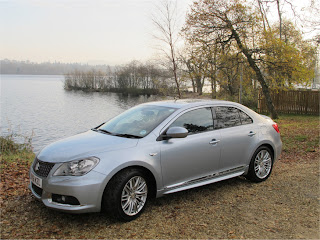 I nearly forgot. The Suzuki Kizashi. That’s why we were at Loch Lomond yesterday. A number of English journalists had flown in from the deep south – Leeds, Manchester and Heathrow – and we all met up at Glasgow airport where we collected the cars and then took them for a drive up to Crianlarich.
I don’t know what the visitors were expecting but one chap wearing a hat, scarf and overcoat earnestly asked me if the cars were fitted with Winter tyres! Crikey, the sun was shining.
The Kizashi is a difficult car to place. The kit and spec pitches it at the premium end of the mid sized saloon car sector, but the price puts it at the bottom.
It’s got a 4 cylinder, 2.4 litre engine with 175 bhp and it’s got four wheel drive. It’s also got a CVT gearbox, but unlike others tried recently this one works rather well. Using the paddles actually makes it feel like a gear change. The car is front wheel drive until a button engages the intelligent all wheel drive system.
And that’s about it. Suzuki are only bringing in 500 of these for sale next year and there is only one spec. No diesels and no base models.
So what’s the plan? Apparently the Kizashi was designed from the ground up and built by Suzuki themselves to show what they can do, so it’s a sort of ‘halo’ model for the range. It offers a comfortable ride and a well equipped cabin and although no price has been confirmed, it is expected to go on sale next year for around the 23 grand mark.
In other words, a lot of car with a wee bit of exclusivity for not a lot of money.
Posted by John Fife at 09:38