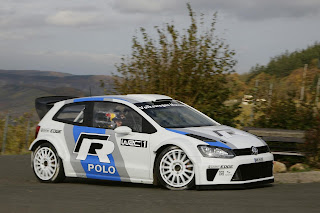 Although Volkswagen is continuing to build up to its 2013 World Rally Championship campaign using a couple of Skoda Fabias at present, the new Polo R WRC has been spotted testing in Germany today. And guess who was at the wheel? Carlos Sainz no less.

The first ‘real stage’ test runs of the 300 hp, 4WD machine were carried out in the vineyards of Veldenz near Trier which are regularly used on the ADAC Rallye Deutschland WRC counter.
Both Carlos and Dr Ulrich Hackenberg, VW board member of the development Division, drove around 100 problem-free kilometres on the 2.8-kilometre tarmac circuit. “I immensely enjoy being involved in the development and testing of the new Polo R WRC and having the privilege of driving the first kilometres is naturally a great honour," said Carlos. "The car is still in an early stage but already feels very good.”
“This first Polo R will serve as a test vehicle for various components such as engines, gearboxes or suspension parts. The findings obtained in these tests will be directly fed into the Polo R WRC rally car,” explained Volkswagen Motorsport Director Kris Nissen. “Next year we’ll be running an extensive testing programme on tarmac, gravel, mud and snow in order to prepare ourselves for the 2013 season as best we can.”
Next week the German Sepp Wiegand with Dakar winner Timo Gottschalk as co-driver and the Dutchman Kevin Abbring with co-driver Lara Vanneste will compete in Rally Wales GB (10–13 Nov) in two Skoda Fabia cars as the Rally Team continues to build up ‘field experience.’
Posted by John Fife at 17:58