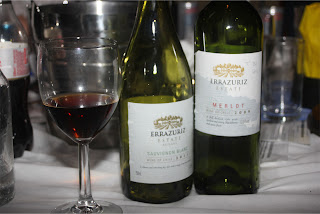 Sorry about this, but I couldn't resist it. It's a bit of an in-joke so if you don't get it then you'll need to speak to someone from Glasgow or central west Scotland to give you a hand. Or maybe you saw some of the late Stanley Baxter's TV sketches in which he sought to educate and enlighten those who lived outside Scotland's cultural capital about the delights and complexities of the local dialect.

It was obvious that the wine from this chateau Zuriz somewhere in Chile was no ordinary wine, but maybe had some ancient civilised connection with a Glasgow vineyard or 'big hoose wi' brambles' but when I saw these bottles of house-wine on the tables at last night's Scottish Rally Championship awards 'do' I just couldn't help myself.

So, when a fellow table guest asked, what's that you've got over there, I replied: "Erra bottle of red wine owererr, and erra bottle of white wine." As I said, if you don't get it, then get some outside help!
Posted by John Fife at 20:37