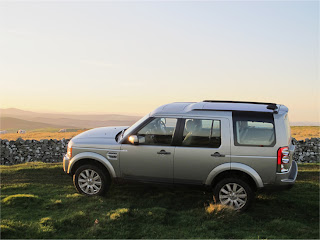 Bumped into Ronnie Dale high on the moors above Hownam on Dere Streetm, the old Roman road,  in the Scottish Borders today at the launch of the Land Rover Discovery and Defender 2012 model year.
The ex-rally driver runs a highly successful and internationally renowned 4x4 school and as such does a lot of work for Land Rover events organising routes and tests for journalists. His son Douglas now has more to do with the business and although Ronnie still lives up here, Douglas has had to move south to cope with the demands of his freelance off-road training and consultancy.
With these two involved, anyone attending a media event, especially a Land Rover event, can be assured of some demanding and testing, some say tortuous and sadistic, routes through bogs and streams and both down and up some greasy slopes and impossible inclines. The only reason that I would tackle such obstacles and terrain is – it’s not my vehicle! 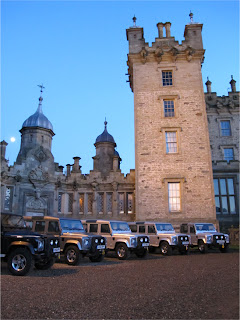 The route started from Edinburgh this morning in a Discovery TDV6 with automatic 8 speed ‘box but tonight we’re going out on a night-time safari in the new 2.2 litre engined Defender. This new engine is a Euro-5 replacement for the outgoing 2.4 litre unit, but it’s supposed to be more powerful and torquier than the old engine while being more fuel efficient and cleaner.
There’s just one thing. I’ve seen all the Defenders lined up outside Floors Castle, and they all have winches mounted on the front bumper plus extra spotlights. Chief Land Rover test engineer David Sneath has promised us that both passenger and driver will have “to participate” to get round tonight’s manoeuvres in the dark.
Apparently, the route-markers are using glow-sticks stuck to trees to highlight the route through the Floors forest estate which has to be followed. They obviously work. One Italian journalist apparently managed to hit the same tree twice. Once on the first lap, and again on the second lap. Who said Italians were not consistent?
Posted by John Fife at 22:29