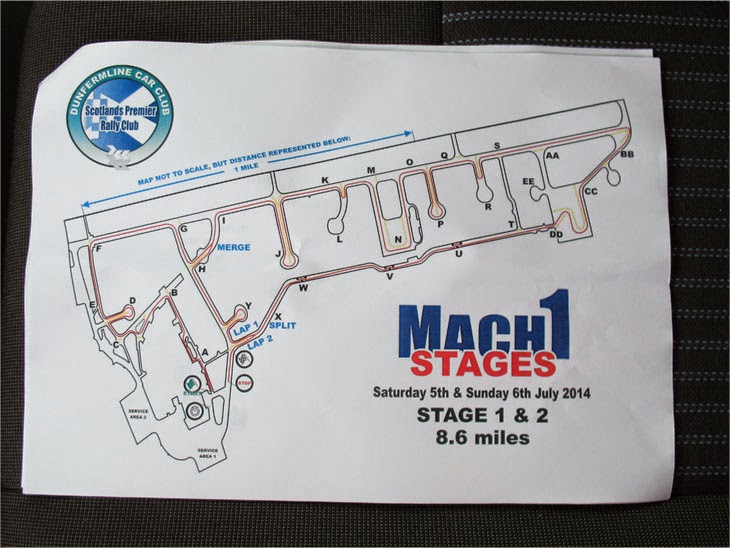 Tommy Morris leads the Mach1 Stages Rally after 2 of the event's 8 special stages. The Metro looks quite at home out there on the wide open expanse of moorland and tarmac, although there was some concern at the end of the first one. A wee gearbox oil leak had been spotted but it's all under control. The second stage was completed with another fastest time.

The big trouble, and one that is facing everyone, not just the leaders, is tyre wear. It's not just the pace of competition that is heating up but high temperatures in the summer sunshine and high ground temperatures are exacerbating the problems. Half an hour after finishing the second stage, Garry Adam's were still hot to the touch and the alloy rims were blistering-burny to the bare hand!

Speaking to Alistair Inglis in the Lancer, he had purchased extra hard '5' tyres from his supplier and was told "You'll never need '5's in Scotland, it never gets hot enough", so it's a good job he bought some '7's as well, but reckons he needs '9's now. So much for "you'll never need 5s", eh.

Donnie MacDonald is holding second place in the Lancer with Inglis only 4 seconds behind him and Lee Hastings is fourth in the Subaru. Top 2WD is Garry Adam and that's despite a huge spin in the second test when he went off backwards into the grass - and took 30 seconds to find the road again! But he's actually sharing his fifth overall placing with Nick 'Rapid' Runcie in the 1.6 Citroen Saxo and Alan Gardiner in the MkI Escort.

James MacGillivray lost time in the first stage when the Escort's brakes failed and he didn't have much better luck in SS2. It's the same with Barry 'Glum' Groundwater, looking even more glum than usual after two stages' worth of brake problems in his 'new' Subaru. As for Stuart Walker, we've lost him, possibly in the long grass somewhere.

First retirement? Possibly Iain Stewart in the Mini - the throttle stuck open on the second corner of the first stage!

Oh, and did I mention it was hot out there? Just ask young Ruary MacLeod driving faither's Civic. The front tyres used up 4mm of tread in the first stage - and that was only 8 miles. The hardest part of the route are the 'Lollipops' (see diagram). These are the parking areas for fighter aircraft along the runway and where the organisers have routed the cars off the runway, down to the 'lollipop', round it, then back up the straight to the runway again. Th camber is all wrong for the cars and they are scrubbing the tyres big time.