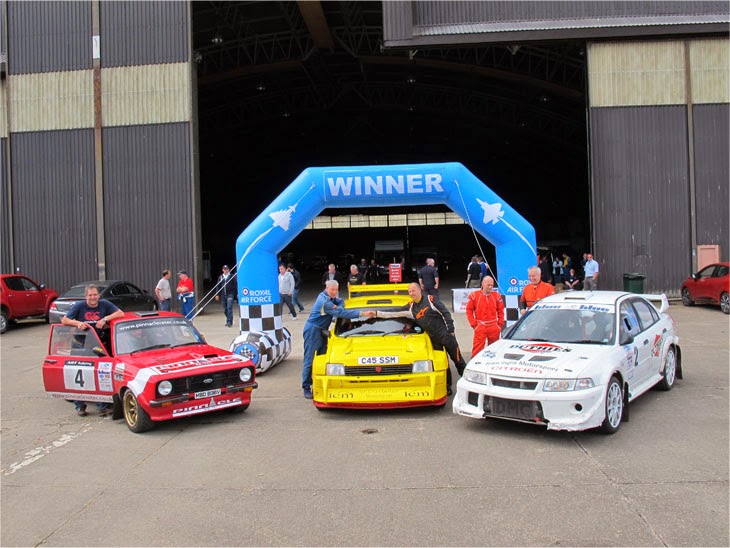 Tommy Morris and Colin Harkness won the inaugural Mach1 Stages Rally at the former Machrihanish airbase near Campbeltown, but he was lucky. On the final stage of the weekend he caught up with young Ross Marshall going for the same bend after the Merge: "I took my eye off the ball," said, Tom, "I was watching Ross instead of watching myself. I just missed my braking point, hit a super single and launched the Metro up on 2 wheels. It tore the inner wing off the front wheel and broke the Pro-Flex canister off its mount. That fractured a pipe and it lost all the fluid. I thought it was steam from the radiator, but it was just oil smoke."

Alistair Inglis and David Coutts was second in the Lancer and just couldn't reduce the deficit: " Full marks to Tom on the win, but I like to think I pushed him hard today. We hit his tyre after he hit it and left it in the middle of the road on that last stage, but no damage - but what about these Escorts. Four of them in the top six."

Colin Gemmell lost out on a top six finish when he slid off in the glaur on the penultimate stage, sliding across the grass for 200 yds towards a brick wall. It came to a halt against the wall and didn't even break the number plate.

As for Donnie MacDonald, he's away home seeck. The car lost drive - again. And there to whisper words of kindness, comfort and commiseration in his hour of need was - The Sheriff. It's a good job Donnie doesn't have a gun permit!