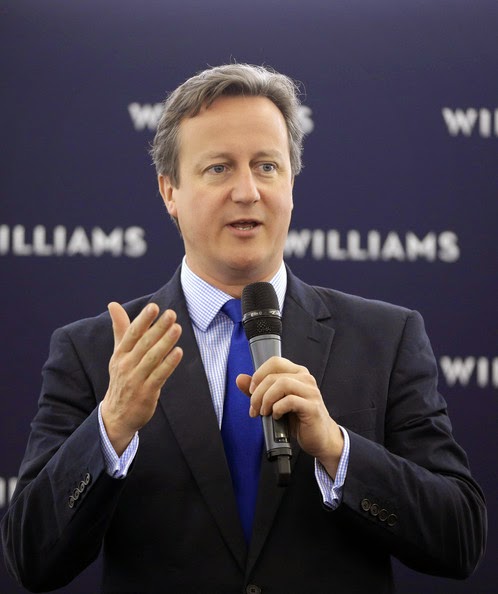 The Prime Minister officially opened Williams' new F1 engineering facility in Oxfordshire last week and hailed F1 as an "an amazing success story" for the UK, with eight of the 11 teams based here and tens of thousands of people working in the industry.

He also revealed that the prospect of ‘closed road’ events had taken another step towards reality. The government Coalition has promised to change the law to give local authorities the power to stage motor races on public roads. The change is expected to be added to the Deregulation Bill in the autumn, and could be in force before the general election next year.

It would appear that the Government has been incentivised by the thought of making money. After all, hosting the first three stages of the Tour de France this month is estimated to have boosted the UK economy by more than £100 million.

Government ministers have also ‘been advised’ that such a law change could lead to an extra 20 motor sports events in Britain per year, generating some £40 million over five years for local communities - and added  the fact that the revenue from a Grand Prix would be far higher!

Under present legislation the current Private Bill process to authorise a road race can take up to 18 months, although in reality it can take much, much longer depending on who is sponsoring and backing the Bill, and requires the approval of both Houses of Parliament.

After the Williams F1 announcement, the MSA issued its own Press Release with MSA Chief Executive, Rob Jones commenting: “This has the potential to transform British motor sport and is something that we have campaigned for over a very long period of time. It is a significant step forward and will bring Britain in line with other countries across Europe where this is already commonplace.”

Quite an influential group eh? But they all have one thing in common – motor racing, although Derek Warwick’s inclusion in this group may have had something to do with his venture on the 1990 Lombard RAC Rally. However, his transition from F1 to world rallying was prematurely curtailed by a ditch – on Stage 13!

I would hope that the omission of any leading ‘motor rally’ figures or representatives was deliberate given current sensitivities, but I would still have expected some comment at least being sought from Kris Meeke given his stature within the sport and experience of closed road events in the land of his birth. This might have given a little more ‘balance’ to the views, but the worrying concern is that with all these motor racers jumping on the bandwagon, there will be a flurry of applications for street races, hillclimbs and sprints.

On the other hand, the first meeting of the Government Review Group on motor sport safety is taking place this coming week.

That’s a wee bit of a surprise considering the Government has not yet announced the individual names of all those who will be part of the group, merely five organisations and two individuals including JYS! So if they haven’t decided who will comprise the group how can they all meet? Still I’m sure an early meeting will set the tone, and hopefully this first meeting will be used to determine the future make-up of the Group and employ some folk who actually have relevant experience.

Fingers crossed for some common sense.

Note: More comment and detail in the rally mag at:
http://www.jaggybunnet.co.uk/2014/07/14-jul-pm-backs-closed-roads/