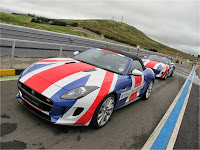 Spent the morning yesterday at Knockhill, driving the Jaguar F-Type V6S and V8S back to back with GT racer Chris Dymond alongside as my personal driving instructor - and Jaguar protection officer!

Due to the health and safety pin brigade these days, ‘professional’ drivers must accompany ‘non professionals’ at track and demo days and other test and appraisal sessions, but there’s good reason.  I recall seeing another journalist being shown the door at Millbrook a while back after taking a Morgan Plus 8 for a rather energetic safari across the grass on the mountain circuit.

But it’s no bad thing having someone like Chris alongside. He’s been racing for about 7 years now (after 10 years in Karts) first in the Fiat Racing Challenge and then the Renault Clio Cup series, before moving on to the FIA GT3 European championship driving Alpina, Ascari and Jaguar GTs and he’s also raced Radicals, so I was in good hands.

I did have to have a word though. He speaks very quietly (or perhaps that was a reflection on my excellent car control!) and I had trouble hearing him over the furious scream of the V6 (or was that me?) and the glorious bellow of the V8. Unlike the wife, he didn’t need to shout at me, so I must have given him the impression that it was all under perfect control.

But seriously, having someone like Chris adds to the enjoyment. I’m of the opinion that drivers never stop learning, especially on circuits, and especially at circuits you think you know! His lines are slightly different from Iain Forrest’s fatherly guidance and it would be great to sit beside them both in the same car at some time just to compare, but that won’t happen.

No doubt personal self preservation is uppermost in the minds of these ‘pro-drivers’ at days like this, or perhaps more importantly, preservation of the cars, but he had me braking really early at the Hairpin each time round. Coming out of Clark, it was full bore along Hislop’s to the Hairpin, firmly squeeze (don’t jump on!) the brakes at the 100 metre board and the Jag just dug in and stopped, shedding 70 mph in a heartbeat before the turn-in. The brakes were so good, I nearly had to accelerate again to reach the bluidy corner.

Any time I did brake late or get the power on early, the quiet voice alongside would ‘have a quiet word’!

Full report on the website when I get the pics from Jaguar.
Posted by John Fife at 10:56