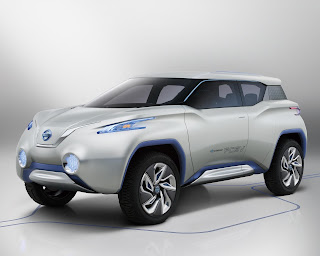 Following on from yesterday’s ‘Blethers’ on the increasing numbers of vehicles on the world’s roads and the threat this might pose to the planet, I thought you might be interested in the latest example of manufacturers addressing these issues.

At the Paris Motor Show in two weeks time, Nissan will unveil their latest concept vehicle, the Nissan TeRRA SUV. It is powered by an innovative fuel-cell and driven by an electric 4x4 powertrain.

Driving the front wheels is same electric propulsion system currently used in the Nissan LEAF while each rear wheel will have its own an in-wheel electric motor. As no drive shafts are required to power the rear wheels, there is no hump in the floor or on the underbody thereby creating a truly flat platform. 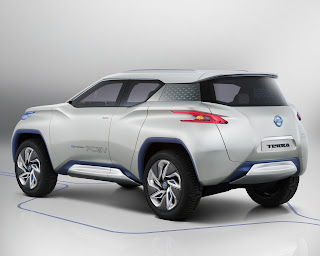 The Nissan hydrogen fuel cell stack is a flat, highly compact unit that features world-leading power density of 2.5kW/L and there is plenty of room under the bonnet. This is the latest in a series of Nissan fuel cells since 1996, which now costs just one-sixth of its original 2005 design as the need for expensive precious metals has been slashed to one-quarter of the previous level.

What the pictures don’t show is the physical size of the car. It’s not as big as it looks. That’s why the seats are ‘staggered’ so that those sitting side by side actually have their shoulders overlapping slightly rather than rubbing together. Ideal if you’re all sweaty from a gym work-out and then picking the wife up on the way home.

In fact, the TeRRA SUV is little more than 4 metres long and only 1.,8 metres wide, that’s no bigger than a Qashquai.

Naturally, Nissan has gone to town on the interior, this being a concept for the Paris fashionistas, and so there is no ignition key. Instead a tablet computer is inserted into the dock behind the steering wheel and performs all the necessary automotive functions from there. Then when you park up, you take the tablet into work or into the home and use it as a standalone computer thingy.

The result is a zero emission, four wheel drive SUV, and yes I know it looks like a wee boy who has puffed up his cheeks and is holding his breath, but it’s the technology that is important here.
Posted by John Fife at 09:33