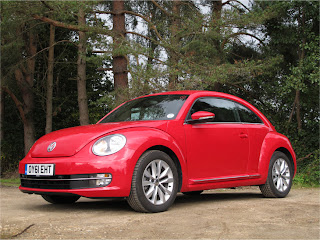 Retro is cool these days. Just look at the success of MINI and Fiat with the 500, and of course the Land Rover Defender, but that’s hardly retro, it just hasn’t changed!

So it’s no surprise that Volkswagen got in on the act with their Beetle. As someone who once helped a school friend strip an air-cooled flat four on a kitchen table using a Haynes manual, I have a fondness for Beetles.

This was a split rear screen job and it was old even then. We were both still at school at the time and he had acquired this 1950-something Beetle for the price of a school lunch. It was a non-runner. The 1100cc (or thereabouts) engine was tiny and a doddle to work on. From memory, it was held in the chassis with four bolts, so it was easily dropped, and carried in to the kitchen.

Thinking back, he must have been a spoiled child. His Mum didn’t bat an eyelid and they ate their meals off trays till we got it finished.

So when a bright red Beetle turned up at the door the other day, it conjured up images of oily fingers eating pie and chips out of newspaper whilst scanning the next pages of the stripdown and rebuild.

Of course the modern water-cooled FWD Beetle is nothing like its predecessor. These VW twins separated by generations share about as much in common as Arnold Schwarzenegger and Danny de Vito. 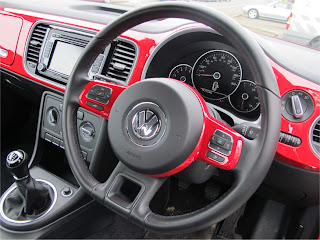 And yet there is a similarity, the sloping tail, droop snoot, and wheel wings, it’s all reminiscent of more carefree days with chrome bumpers, hub caps and trafficators. Bird-puller? In those days, if you had wheels, you were already one step ahead of the game.

The nostalgia continued inside with a painted metal dashboard and door frames. And I know the original Beetle had a huge spindly bakelite steering wheel, while the new one has a leather rim and painted centre, but somehow it just seemed right for the car.

It’s also a bit quicker than the original 25 hp job. With 160 bhp from its 1.4 litre water cooled, vertical four-in-line, this is a whole lot more fun to drive. And it handles. Maybe there's something to be said for modern after all.
Posted by John Fife at 15:17