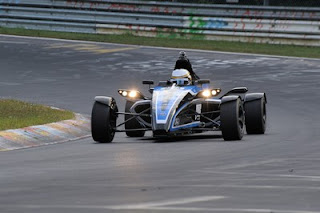 A Ford powered car has just recorded the 11th fastest lap around the Nurburgring Nordschleife circuit. Nothing unusual about that, but this Ford only had a three cylinder, one litre engine doing the business.

To showcase the potential of Ford’s tiny new EcoBoost engine, Ford engineers had removed the 180 PS,1.6 litre EcoBoost unit from a Formula Ford chassis and installed a 205 PS version of the tiny titan. Not only that, the car was road legal!

The team had fitted wheel covers, front and rear lights and indicators, wing mirrors and a horn, and was running on road-legal tyres.

And yet it still managed to record a 7 minute 22 second lap. 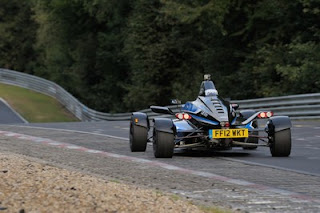 "This little engine has people rubbing their eyes in disbelief," said racing driver and course specialist Nick Tandy, 28, who drove it. "It's simply astonishing that a 3 cylinder, one litre engine can deliver that kind of performance."

And here’s the thing, at an average speed of 75 mph, this little racing rascal was returning 57 mpg.

Now, what are the odds on Ford having already supplied a 1 litre Ecoboost engine to a certain rally car prep firm somewhere in Cumbria? Just think, spare engines could be carried as hand luggage!
Posted by John Fife at 15:01