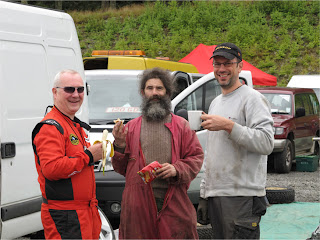 This is a picnic north-eastern style, and was spotted being demonstrated by three versatile and experienced practitioners of the art at the weekend’s Ian Broll Merrick Stages Rally.

The idea is to take it in turns to have a bite of banana and pass it on, take a bite of the roll and a crisp out the packet and pass it on, followed by a sip of tea from the mug, and pass it on.  This particular repast only works with three people, but ‘courses’ can be added to accommodate more.

Modelled on the original five loaves and two fishes parable, this image perfectly captures the sharing and canny nature of the close bond that exists between rally crews and service personnel.

There’s no need to name them, we know who they are.

As for the driver? He had gone for cakes for the ‘sweet course’.
Posted by John Fife at 17:21