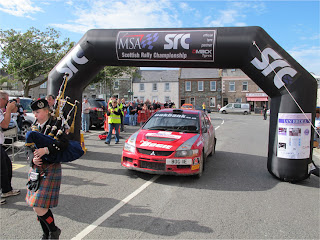 There’s a full report on the Ian Broll Merrick Stages Rally up on the website now, with a separate roundup covering all the Classes.

The late Drew Gallacher was the only other driver to have achieved four titles, but his tally consisted of a hat-trick in 1978, '79, and 1980 while his first title was won in 1973. David and Kevin’s record is therefore unique.

But what happened to Euan Thorburn?